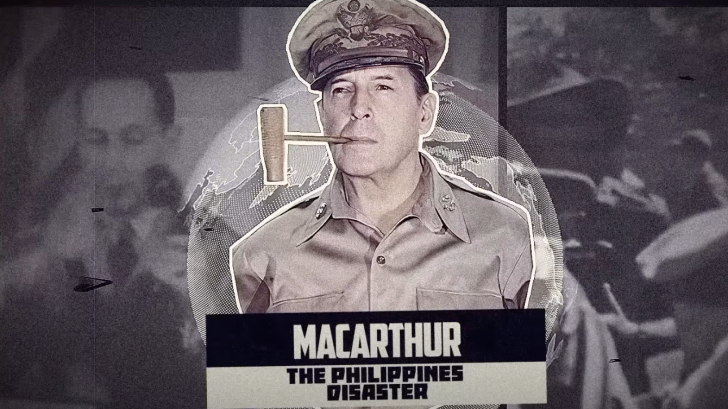 MacArthur carefully crafted his own image with the help of a Public Relations staff. His obsession with being viewed as a great commander led him to bypass command from higher-ranking officials. The likes of Dwight Eisenhower already stated their bitterness towards MacArthur’s obsession with his public image. Soon enough, his narcissistic personality would catch up to him and his forces when the Imperial Japanese Army decided to invade the Philippines in 1941.

While stationed in the Philippines, he was tasked to carry out War Plan Orange 3 (WPO-3) which aimed to take a defensive stance if the Japanese attacked and help the US Navy deploy its fleet by delaying the Japanese advance. They were supplied with 107 P-40s, 35 B-17s, 108 light tanks, and a few artillery guns. However, MacArthur felt that this operation was “defeatist” and that they would lose the Philippines if he followed it. He sold the higher-ups with a more aggressive plan, one that would advance his troops to the beaches in an aggressive yet defensive stance.

US officials greenlit MacArthur’s plan. MacArthur’s infantry, along with their outdated M1917 Enfields, were now stretched out over 9 major islands. Their equipment and supplies were now scattered and the layout of the Philippine archipelago made it difficult to move and coordinate troops. MacArthur did this while anticipating that the Japanese would not attack the islands earlier than April of 1942. This meant he had no realistic plans to defend the islands with his current troops.

Japan Attacks Ahead Of Schedule

When war broke out,  MacArthur failed to do anything significant during the early hours even after insistence from Major-General Lewis Brereton, Commander of the Air Force, to bomb Formosa. A direct order from Washington told MacArthur to carry out Rainbow Plan 5 which he also did not do. An hour later, the Japanese attacked USS Preston in Davao Bay and Brereton asked once more to bomb Formosa. He was denied, stating that they should not do the first overt act of war. Hours later, two more Japanese attacks were seen over Luzon – Brereton asked again and was denied.

Too Little, Too Late

It wasn’t until 8 hours after the initial attack when Brereton was allowed to do a reconnaissance flight over Formosa. When they were finally getting ready to bomb the island, the Air Force was bombed and strafed by Japanese bombers and fighters while on the ground. Half of the Air Force was annihilated during the attack and the remaining B-17s were ordered to retreat to Australia. Meanwhile, the submarines were unable to down any Japanese ships no thanks to their unproven and malfunctioning Mark 14s. The remaining US Navy fleets had to retreat in the process.

With its Air Force crippled, torpedoes malfunctioning, and Navy fleets retreating, the infantry failed to defend the Philippines from Japan’s succeeding attacks. In December, most Japanese troops had already infiltrated the Philippine archipelago and fell a few months after. The failure of the Philippines and US troops to defend the country doesn’t all fall on MacArthur but his decisions did have a negative effect on its outcome. To this day, it is still seen as the worst military defeat in US history.