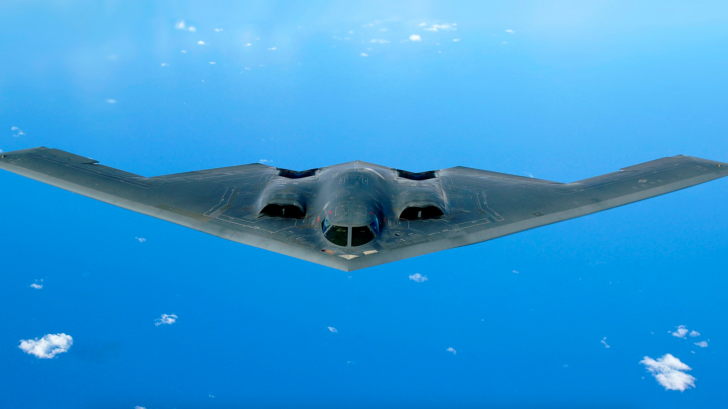 What do you get after combining 100 years of bombing experience, advancement of technology and engineering, newer aircraft designs, and the introduction of smart bombs? A highly sophisticated stealth bomber that has never been targeted, detected, or engaged during its service with the US Air Force.

2. Ahead of its Time

When its prototype, YB-49, was first introduced, its all-wing design featured very low drag and high speeds. Unfortunately, it lost to the B-36 Peacemaker which is an amazing aircraft in its own right. Compared to the B-36, it could reach higher speeds but could only carry 16,000 lb while the B-36 carried up to 86,000 lb.

3. From The Stealth Fighter Program

Following the advancements made by the B-1 Lancer and the F117A Nighthawk, a newer plane was made and designed by Northrop. It had a decreased radar cross-section, lower acoustic noise, a small visual profile, decreased electromagnetic emissions, and decreased infrared signature. This low-observable aircraft is now known as the B-2 Spirit.

Due to its all-wing design, most ground-based radars are not able to detect the B-2. Oftentimes, it would just deflect the opposing radar away from the originating source. To further help avoid detection, the B-2 also uses radar-absorbent material (RAM) which enables it to absorb and neutralize radar waves.

5. Its Engines Are Inside

A traditional plane would have its engines outside the airframe. However, the B-2’s engines are placed inside its airframe, making the whole plane muffle the sound its engines make.

6. Has Complicated and Long Exhaust Paths

Radar and noise weren’t their only concern for detection. Heat can easily be detected via infrared detectors. To counter this, the B-2 absorbs cold air through its dual air intake system, combines it with the heat from its engines, and passes it over the heat-absorbing tiles.

The presence of vertical and horizontal stabilizers makes it easier for radar to detect airplanes. That’s why the B-2 has flaps on the rear of its wings to control its roll, pitch, and yaw. These flaps can also extend both up and down, acting as the B-2’s speed breaks.

8. Has A Fly-By-Wire System

Thanks to its fly-by-wire system, the complex flaps aren’t manually controlled by the pilot. Instead, these are adjusted on demand by the computer depending on the pilot’s flight plan. The plane also moves its rudders automatically to counteract the turning force and adjusts the flaps to reduce turbulence.

Joint Direct Attack Munitions (JDAMs), also known as “Smart Bombs”, are designed to be guided by their GPS and inertial guidance system to deliver bombs with pinpoint accuracy. During Operation Allied Force, B-2s used 651 JDAMs with 96% reliability and hit 87% of their intended targets.

Aside from the JDAMs, it will also carry a new variant of the AGM-158 called the AGM-158B-2. This new cruise missile variant has an extremely long range of 1,200 miles and weighs about 5,000 lb to deliver a 2,000 lb warhead. Production began in 2021 and deliveries are expected in January of 2024.