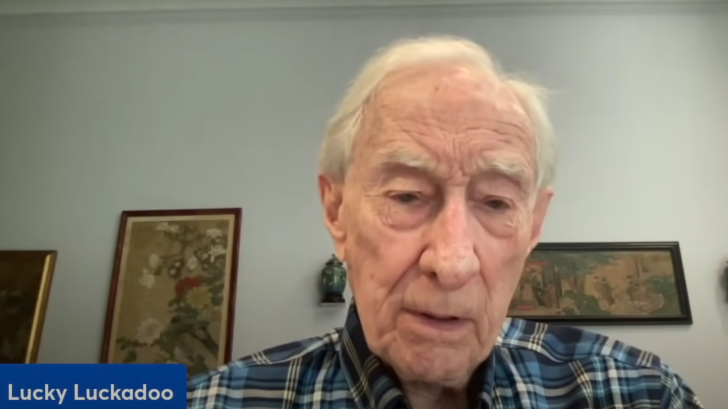 1. How He Became A Pilot

Luckadoo first got his license flying a PT-17 biplane. Afterward, he flew a BT-13 Valiant and was assigned to a multi-engine advanced school in Georgia. There, he was the Captain of the class and flew Beechcraft AT-10s. He was one of the 40 graduates assigned to a B-17 bomber group stationed in Nebraska.

2. They Had No Pre-Training

They were brought in to replace the co-pilots promoted to pilots. However, they got there without any pre-training whatsoever. Suddenly, he wasn’t in charge of flying twin-engined AT-10s. Instead, he was co-piloting a bomber with four engines. It was up to the pilots to train the fresh graduates about the B-17.

3. He Earned The Respect Of His Crew

His pilot was hospitalized for 2 weeks and still had to be loaded into the plane for a mission. The navigator and bombardier never accepted Luckadoo and even forced him to transfer but Lucky stuck through it. The pilot gave Luckadoo a chance to prove himself, stating he wasn’t able to fly the plane. Luckadoo did so and got the crew there safely.

In his first mission over Europe, his crew was contacted by none other than Axis Sally. As soon as they entered German-occupied parts of Europe, Axis Sally greeted and named them all one by one. Sally ended the call by saying that they made the biggest mistake of their lives.

Bombers stuck with each other during missions using a formation. They were staggered, one wingman flew high and the other flew lower. The Luftwaffe countered this by flying towards them, abusing the fact that the top turret and ball turret gunners couldn’t fire at them at a level altitude.

In response to the Luftwaffe’s plan, Boeing designed a new variant with a chin turret that was remotely controlled by the bombardier. Though, at times, Luckadoo said they encountered veteran Luftwaffe pilots who have been fighting for many years prior which made it significantly harder to survive those missions.

7. A Game of Survival

According to Luckadoo, the bottom line was you were lucky to survive those hellish missions against well-equipped and well-trained fighter pilots. During his time, bombers didn’t have fighter escorts with them which made dealing with German planes quite a handful.

Lucky claimed that LeMay’s efforts during the war are still not appreciated today. LeMay led by example and analyzed every attack that the Luftwaffe made. In addition, LeMay flew some of the worst missions during WWII which further increased the respect his fellow pilots had for him.

The lead pilot had about 45 seconds to spot where the heaviest flak presence was to be felt. If done correctly, the bombers could alter their course by a degree and potentially avoid the pre-determined volley.

If your crew was designated to be the lead crew of the formation, the co-pilot needed to be replaced with a command pilot in charge of the whole formation. This setup meant that the existing co-pilot would be moved to the tail to be a gunner which Luckadoo thought was unfair.

11. You Can Burn Out The Barrels

In his first mission as the tail gunner, he was taught how to load and aim the guns. What they forgot to tell Luckadoo was to not freeze on the triggers. Doing so would burn out your twin .50 cal machine guns and Lucky did just that in his first tail gunner gig.

The “Purple Heart Corner” or the “Coffin Corner” was the lowest position in the formation. It earned its lovely nickname due to its vulnerability to fighter attacks and flak.

When they were in the presence of flak, Luckadoo recalled that the Luftwaffe fought too aggressively – even flying while flaks were in the sky. When they ran out of bullets, they tried to take off the B-17’s tail using their wings akin to a Kamikaze pilot.

Managing your body’s excretions is hard to do when you’re flying at -50 to -60F. Sweat freezes instantly and becomes crystals that could go into your oxygen flow. If you didn’t clear it out, you would die. If they wanted to pee, they would do so in condoms and as for “number 2”, they did it while wearing the suits if they couldn’t hold it in any longer.

15. War Will Mature You Overnight

You either shoot or you die – the enemy aims to kill you. War will question the morality and mortality of the soldiers on the battlefield. It is hard to put into words what these brave young men had to go through during the war.