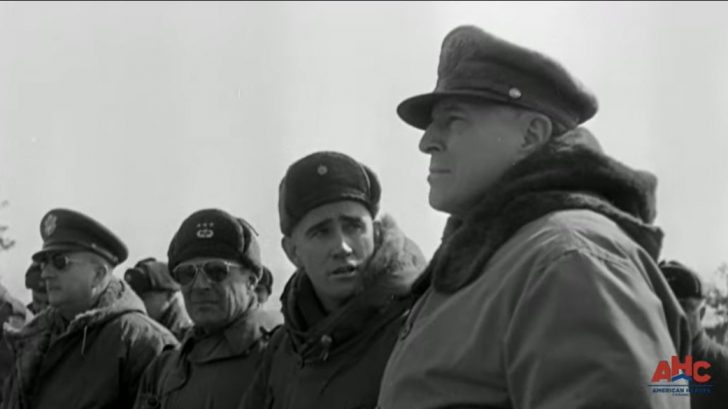 President Truman was also worried that China might view the invasion as hostile, causing them to intervene in the conflict. However, MacArthur assured his superior that the chances were low.

Little did MacArthur know that he was wrong.

MacArthur, wanting to deliver a final blow to the enemy, made a fateful decision. He was so convinced that China wouldn’t enter the war.

So, he split his army and the 1st Marine division in separate pursuits of the fleeing North Koreans. His troops drove back the North Koreans to the Chinese border.

MacArthur was one of the most popular and decorated generals of his time. He was one of the few men who achieved the five-start rank, previously serving in World War I and II.

He enjoyed immense popularity from the American public, particularly after playing a pivotal role in the Pacific Theater in WWII.

But historians believed that McArthur was obsessed with victory and ignored all threats. That includes the most significant threat of all – the threat of war with China.

China, unwilling to see their ally defeated, laid out a trap for the Americans- over 120,000 Chinese were waiting.

The Chinese Army Attacks in Strength

The Chinese attacked MacArthur’s separated units, sending his army to retreat south. The Chinese trapped the 5th and 7th marine regiments north of the 1st Marine Division headquarters in Hagaru-ri.

The central transportation hub and main supply depot are now surrounded by 3,000 Chinese, hell-bent on eradicating the 1st Marine Division. The Chinese troops flung themselves against American lines, driving the US troops back to South Korea.

In retaliation, MacArthur asked Truman for permission to bomb communist China using the National Chinese forces from Taiwan against the People’s Republic of China.

The Firing of McArthur

However, President Truman’s main concern was saving as many lives as possible, even if that meant calling a ceasefire.

The two men clashed with each other. For Truman, war was an opportunity to stop the spread of communism in South Korea. However, from MacArthur’s perspective, it was a way to liberate the North from communist control, and therefore, more aggressive action was needed.

As a result, the General thwarted the President’s attempt to negotiate a ceasefire. Instead, he ordered his troops to invade North Korea, pushing the NKPA past the 38th parallel. In April 1951, Truman relieved McArthur from his commands because of insubordination and unwillingness to make a limited war.

News of McArthur’s firing quickly spread, and the American found the news upsetting. However, Truman considered his decision just, and it wasn’t the first time the headstrong General defied direct orders from his Commander in Chief.

Truman felt that MacArthur interfered with his hope of ending the Korean war as quickly as possible. Over time, the American public began to understand that going with MacArthur’s policies and recommendations might have led to a more massive war in Asia, which would cost many more resources and lives.