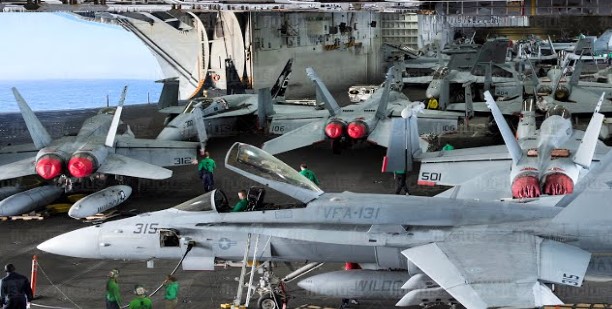 Nations around the world rely on aircraft carriers, not only for offensive but also for defensive capabilities.

Aircraft have always played a key role in keeping nations safe. Moreover, aircraft carriers allow the US military to project this power abroad. These vessels also provide the fleet’s most incredible versatility and technical capabilities.

The hangar is a garage-like structure underneath the flight deck, covering approximately 2/3 of the ship’s total length. It’s not just aircraft that’s stored here, though. The three-deck-high hangar also keeps spare parts, fuel tanks, and other vital equipment.

Elevators Situated on the Hangar Bay

Up to four of these highspeed aluminum lifts can be found on an aircraft carrier.

The elevators could carry large aircraft and equipment up to 200,000 pounds. They’re installed on the outsides of the aircraft carriers so they can be used as flight deck space when not in operation.

Aircraft carriers must undergo various tests to withstand harsh natural conditions and enemy attacks. After each blast, the crew records the effect of the explosions on the personnel on board and the vessel. These are analyzed for further improvements.

With only 300 feet of runway, most aircraft have to use the catapult-assisted takeoff and barrier arrested recovery system. It serves two primary purposes.

First is to propel aircraft in the air over a short distance quickly. Second, it assists the plane in landing using a resting gear to slow them down, allowing a safe landing drastically.

In 1967, the USS Forrestal suffered a fire onboard, causing several millions of dollars in damage and claiming the lives of sailors. To avoid this from happening again, hundreds of sprinkler systems or flush deck nozzles are installed all over the flight deck.

Over 27,000 gallons of water or foam can be dispensed from these countermeasure washdown systems in just a minute. They’re used not only for stopping fires but also for decontaminating ships from biological, chemical, or radiological contaminants.