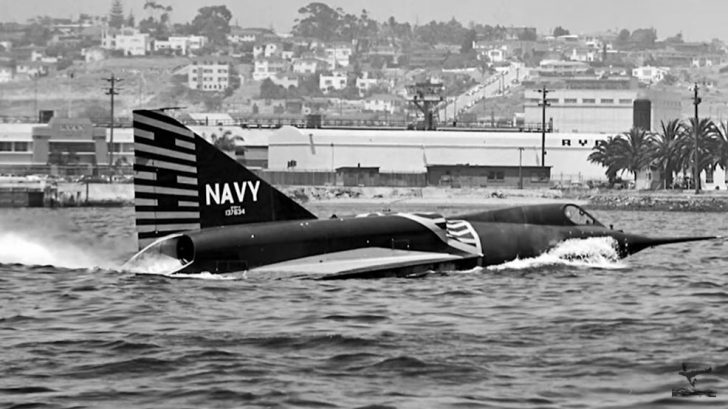 The Convair F2Y was an experimental seaplane in the 1950s and the fastest seaplane in the world. But like any other envelope-pushing aircraft of its time, it was just not meant to be.

Here are the ten interesting things that you need to know about this seaplane fighter aircraft:

1. It has a delta wing which is powered by two engines

This wasn’t a result of some design study but a naval requirement requiring two engines for added safety.

It would spend significant time in the ocean, and the prospect of a single-engine flame-out wasn’t feasible. The two engines also gave it a much-needed redundancy.

Its maximum speed was approximately 825 miles per hour, with a range of 513 miles.

3. For takeoff and landings, it used a pair of water skis

The skis weren’t extended until the plane reached about 10 miles per hour during takeoff runs. These hydro-skis would retract into the fuselage once the Sea Dart was airborne.

4. It was the only seaplane to exceed the speed of sound

Aside from being the world’s fastest seaplane, it was the only one to have achieved supersonic speeds.

However, the supersonic speeds were elusive and could only be done in diving action. Thus, the Sea Dart became the only seaplane in aviation history to achieve this feat.

5. The first aircraft, or the XF2Y-1, was fitted with twin Westinghouse J34 turbojet non-afterburning engines in the upper fuselage, which created 3,400 pounds of static thrust each

Later, the plane would have twin Westinghouse XJ46-WE-2 turbojet engines with afterburners.

6. Because of the horrendous water handling problems, the second prototype was canceled

Meanwhile, the first prototype was repurposed as a test bed for ski and after body modifications.

7. The performance result of the Sea Dart was mixed

The Navy also found it challenging to see continued funding for the program. Moreover, the cost of modifying the aircraft to go supersonically wasn’t cheap.

8. During the Sea Dart’s flight demonstration on the Navy’s mobile base concept aircraft, disaster struck

During a low-altitude pass at about 500 knots, the aircraft experienced a violent pitch oscillation. Test pilot Charles E. Richbourg was killed after the plane broke up over the bay in a fireball.

9. It only flew as a prototype but never entered mass production

A total of five Sea Darts were completed. However, not all were flown. The introduction of steam catapults in 1950 meant that heavier aircraft could now be operated at sea. With no further use for them and no new funds from the Navy, the Sea Dart was put into storage.

10. While it was only operational for half a decade, Sea Darts racked up a remarkable number of flight hours

It was also flown or floated in various configurations as they tried to figure out issues in the water handling.