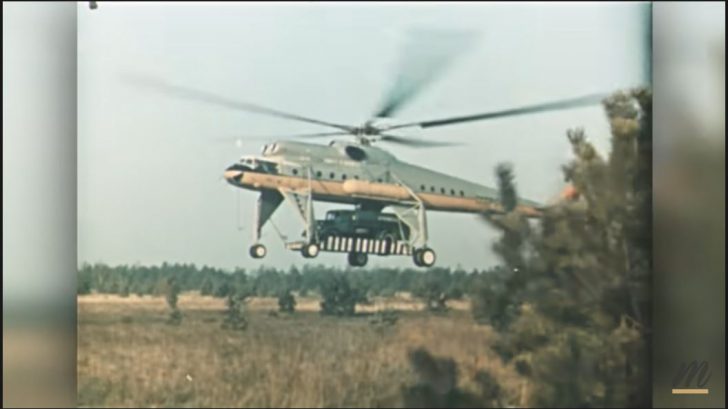 During the 1960s, the Soviets built the largest, perhaps one of the most technically advanced, helicopters in the world. The Mil V-12 had twice the lifting power of anything before it, and the Soviets designed the plane to airlift 25-ton ballistic missiles to remote locations.

Here are the ten facts about the insane helicopter that was ever built:

1. It was a helicopter so large that it baffled observers at the Paris Airshow

In 1971, the Soviet Union brought this helicopter to the Paris Airshow. It could carry nearly two hundred passengers and set world records for lifting power that still stand to this day.

2. When it appeared at the Paris Airshow in 1971, it had already broken world records

This included lifting a massive 44 tons payload to over six thousand feet in 1969, and has the equivalent weight of 25 mid-size cars.

Moreover, the first prototype has broken eight world records, four of which are still current.

3. Western observers of the airshow can only speculate as to the V-12’s true purpose

Many expected hundreds of these helicopters to be pressed into service. However, in reality, impressing the West was the only use the Soviets had left for this massive machine.

4. Development of the V-12 had taken the better part of a decade

Design studies began as early as 1959, and the official go-ahead for its development was given in 1962. The construction of its first prototype didn’t start until 1965. Then the first successful test flight happened three years later.

5. The enormous machine ended up looking like a half-helicopter, half airplane

It also had an inversely tapered wing supporting the two rotors. Moreover, to keep it stable, the rotor blade would be spinning in opposite directions, canceling out reaction torque.

6. The impressive helicopter can gather the cargo at the source and deliver it directly where it needed it to go

This wasn’t anything like four-engine planes that needed runways for takeoff and landing during that time.

7. Operating this helicopter requires a crew of six

The pilot, co-pilot, and flight engineer are seated in the lower-level cockpit. Meanwhile, the navigator, radio operator, and electrical engineer are on the second level.

Similarly, it could also be converted into civilian transport, which could seat up to 196 passengers.

9. A machine this large also comes with compromises

Engineers must work through numerous challenges on the machine’s control and stability. But the biggest problem is that by 1971, it no longer had a purpose. When the Americans launched the first spy satellite into orbit, it could take photographs of more Soviet territory in a single day than all the earlier spy plane missions combined.

10. Development ended in 1974, only after two prototypes were built

During later years, the V-12 was viewed simply as too big and cumbersome to be useful beyond its original mission. There are relatively few scenarios during the 1970s that would need lifting 44 tons of cargo or 200 passengers in a single helicopter.