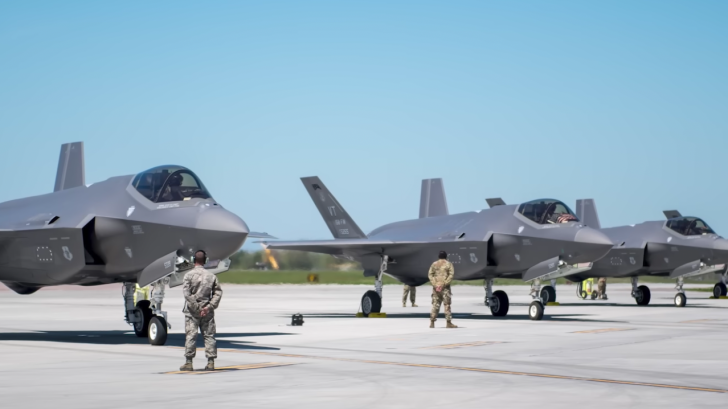 1. It Doesn’t Need To Dogfight

We’ve all heard what people said about the F-35’s dogfighting capabilities – or lack thereof. It is true that it had a disadvantage in a turning fight and was ineffective in surviving attacks due to its lack of maneuverability. However, in a real-life situation, the F-35 wouldn’t need to do these maneuvers because of its off-boresight capabilities that could shoot down interceptors before a dogfight ensues.

Gone are the days of intense in-your-face dogfights we’ve heard of from back in the day. Nowadays, planes are equipped with better weapons that could take out enemies from far away. To further cement that philosophy, the F-35’s AN/AAQ-37 system on its nose can detect enemies from 800 miles away.

3. It Carries A Wide Arsenal of Weapons

The likes of the AGM-158 JASSM can be paired with its impeccable detection system. This missile has a range of 1,200 miles, making the F-35 not a good dogfighter but still an impressive plane in its own right.

4. Not As Expensive As You Think

Yes, the F-35 was expensive to procure in the early stages of development. The F-35A cost taxpayers $221 million in its first stages but further improvements in production saw this price plummet to as low as $77 million. Other variants like the F-35B cost around $101 million and the “C” variant at $94 million per unit.

5. Desirable Cost Compared To Others

When comparing the F-35’s cost to that of the F-22, the latter is more expensive as it reaches $230 million per unit when adjusted for inflation. Meanwhile, the Su-57 apparently only costs $40 million though that number might as well be bogus – more or less, it would cost around $100-$120 million.

Indeed, the F-35 can only carry a “measly” amount but these claims are out of context. The F-35 carries a light load for a reason and that’s to maximize its stealth capabilities.

8. It Has Enough Lift

Yet another criticism about the aircraft is its small wings. Out of context, small wings do have little lift but the body of the F-35 does not. Results from the Martin Marietta X-24A test flight showed that the shape of the body can give it the lift in order to fly and not the wings.

9. It Has Low Speeds For A Reason

First and foremost, it is a stealth multirole fighter. Low speeds enable the F-35 to shoot enemies on the ground as it passes by. Moreover, the F-35 relies on its radar and IR missiles to wreak havoc, unlike planes that need to be faster and more agile to help them in dogfights.