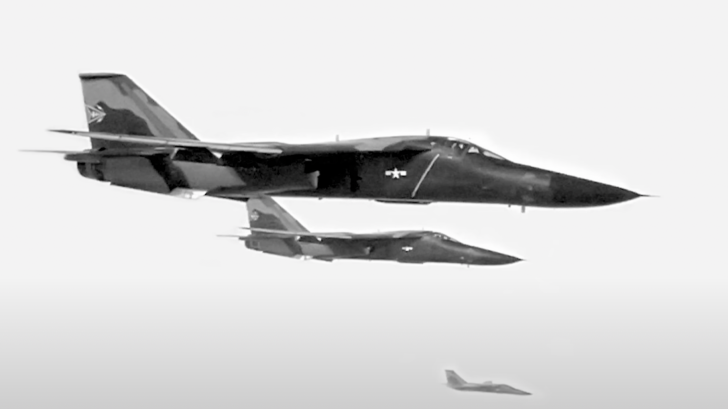 The F-111’s wings were designed to help manage its weight while improving its speed at various altitudes. If needed, the wings can fully extend to triple their surface area. If fully swept back, the Aardvark benefits in the reduction of drag making supersonic flights possible. Its wings also enabled it to carry more fuel and heavier weapon loads.

Inside its weapon compartment, it can fit two 750 lb conventional bombs or one tactical nuke. The Aardvark also comes equipped with an M61A1 20 mm gun with 2,000 rounds of ammo. Some variants could also use AN/AVQ-26 pave tack targeting systems in rotating pods inside the plane. These tracking systems are paired with Paveway laser-guided bombs, making delivery more efficient.

To help in weapon deployment and general navigation, the F-111’s Air Force version uses advanced avionics in the form of AN/APQ-113s and 110s. The 110 is a terrain-following radar used by very-low-flying planes to maintain above-ground level altitudes to make detection by radar more difficult.

The Aardvark can theoretically carry more loads, up to 30,000 lbs, but its fixed pylons aren’t usable if the wings are fully swept. Nevertheless, the F-111 can carry a payload two times more than the F-4 Phantoms.

It was used in Operation Linebacker and Linebacker 2 during the Vietnam War. This plane can fly as low as 200 ft while reaching 480 knots. Because of its loud engine and impeccable accuracy, North Vietnamese soldiers called it the “Whispering Death”.