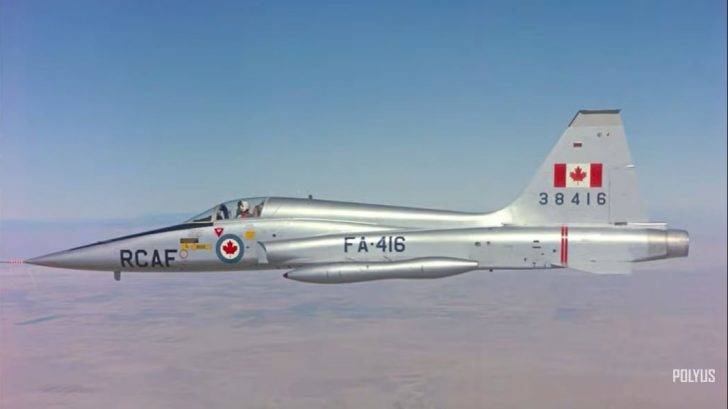 The CF-5 Freedom Fighter was Canada’s first multi-role fighter and the last of the long line of military aircraft built in Canada.

Here are the five reasons the CF-5 Freedom Fighter was almost useless in a real fight:

1. The CF-5 was a clean air day fighter and didn’t have any radar or maneuvering flaps

Thus, it was ineffective in the air superiority role despite being nimble and could carry the Sidewinder heat-seeking missile.

2. As an air superiority fighter, it was useless against all but the oldest relics of the Warsaw Pact arsenal

Although it fared well as a close air support tactical fighter because of its short range and small weapons load, it still lacked all-weather navigation. It is also unlikely to survive in a highly sophisticated air defense environment.

3. It could only engage in within-visual-range dogfights and a bigger turning radius and lower combat ceiling than the aging MiG 19

It couldn’t compete with the ubiquitous or radar-equipped MiG 29, which equipped many of the air forces that the CF-5 could be up against. Only after the CF-5 production had closed would the vastly improved F5-E model could be able to take on the MiG 21 in combat.

4. In an attempt to lower costs in building the CF-5, the maneuvering flaps, windshield deicer, and full inertial navigation system were deleted

While this allowed an additional 25 aircraft to be produced, this degraded the potential of the new fighter, downgrading it to low-intensity and short-range support missions.

5. In 1983, when the CF-18 Hornet, a truly multi-role high-tech fighter, was introduced, the CF-5 was withdrawn from any combat roles

Most of its single-seat variants went into storage.