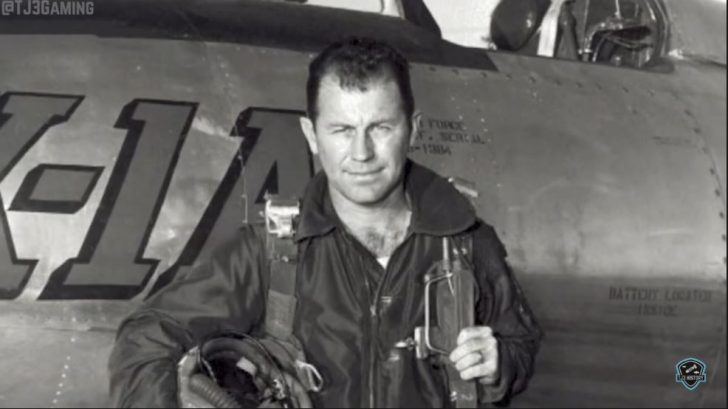 Chuck Yeager was a record-setting test pilot who became famous for his supersonic flight, making him the first human to break the sound barrier.

As a combat pilot, he also completed an astonishing feat- he became an ace in a single day. Yeager took down five enemy planes in a single combat mission over Europe in WWII.

Initially, Yeager was a mechanic, but when the US entered WWII, he became eligible to be a pilot, which he immediately signed up for.

He excelled in training but not without hiccups. Once, while practicing in his P-39 Airacobra, he was grounded for seven days when he clipped a farmer’s tree in training.

The squadron would fly P-51 Mustangs, and he would famously name his Mustang Glamorous Glynn after his future wife. Later into his deployment, and after his first kill, he was actually shot down in a dogfight.

Fortunately, he was able to bail out over occupied France. He escaped and returned to allied territory with the help of French resistance forces, but he wasn’t allowed to return to enemy territory in case he was shot down or captured.

While escorting American bombers in a bombing raid deep over Germany, his squadron spotted a large flight of German bf-109s. Yeager and the other Mustangs quietly maneuvered to the six o clock position, preparing to engage.

As Yeager pulled up on the first pair of German fighters in the back, one of the bandits spotted him and panicked. He rolled the plane over, striking his wingmen, and both fighters immediately went down. Before the battle started, Yeager scored two confirmed kills in seconds without firing a shot.

He then turns to open up to the next fighter, unaware of the Americans. He fires, and the battle starts. After placing a couple of rounds into the 109, he sees it begin to smoke heavily and rollover. It was his third confirmed kill.

He then closes on another German, where he allows a short burst to go. Yeager hammers the fighter fuselage, suffers significant damage, and goes down as well. It was his fourth kill.

Ace in a Day

Finally, he turns and maneuvers to get into a firing position on another Messerschmitt. He shoots all over the aircraft.

According to Yeager, the aircraft rolled over, and then he saw the pilot bail out. It was his fifth kill. This was his fifth and final kill, giving him the rare ace in a day title.

Yeager and the rest of the 363rd have cleared the way for the American bombers. He then forms up with the friendlies. Yeager has now tallied seven kills to his name in the war, rising in the ranks of the American airmen. Later, he would take down another five, giving him more than 11 kills during WWII.