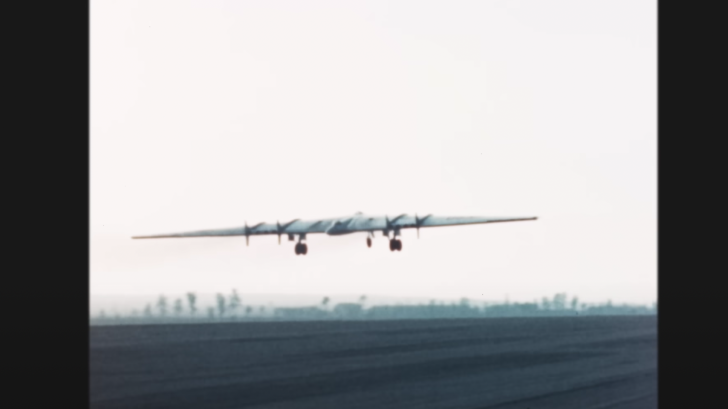 Jack Northrop wasn’t the first to think of an all-wing design to help reduce drag and maximize lift. But by 1940, he had already flown prototypes to prove its efficiency. Using these results, Northrop promised a bomber that could fly 1/3 faster, carry twice the payload, and had 3 times more range at higher altitudes.

Approved in 1941, its progress was delayed for years and it missed out on the war. There were a lot of issues surrounding its development such as technical issues, engineer shortages, and production limitations.

Originally designed in 1941, its radial piston engines were now outdated and unreliable as the jet age crept up. After many delays and test-flight accidents, Northrop abandoned the design. By 1947, their only hope was the jet-powered YB-49. This newer design was fuel inefficient and cut the range in half while taking up 2 bomb bays for extra fuel.

In 1948, the YB-49 crashed, exceeding its structural limit which resulted in its outer wing panels disintegrating and tumbling out of control. Soon after, more handling errors were discovered. The plane’s tendency to yaw uncontrollably made it impossible to bomb accurately. 2 years after, another accident happened due to its nose landing gear collapsing, resulting in the loss of the aircraft.

Surpassed By Other Bombers

The nail in the coffin was the introduction of much better aircraft like the B-36, B-47, and the soon-to-be-introduced B-52. These bombers could carry nuclear weapons while the YB-49 could only use smaller bombs.