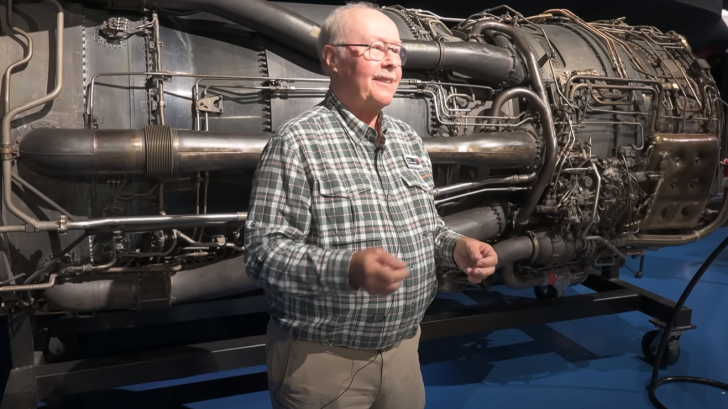 The development of the J58 started way before the Blackbird entered production. The Navy wanted a plane that could reach Mach 3 so Pratt & Whitney drew up the basic centerline of an engine that could get to that speed for a short period of time.

When the Navy saw how much a program like this would have cost them, they quickly lost interest. The Navy wasn’t that invested in the engine because planes weren’t exactly their forte. They favored ships and saw planes as “accessories” as Arnie Gunderson put it.

As soon as Boeing, Northrop, and Lockheed were competing to make an aircraft capable of Mach 3 speeds, the J58 finally found its market. It wasn’t long before the CIA took interest in the promising J58 engine. The project was greenlit and development was in full force.

Modern engines that we see today have twin spools. Meanwhile, the SR-71’s J58 was a single-spool turbojet which means the entire turbine drives the compressor alone. During its first stages, it also didn’t have a bypass unlike most planes – that was added a bit later.

Like what your high school Physics teacher told you, some materials can expand if exposed to extreme heat and the J58 is no exception. The whole engine grows 6 inches in length and 2.5 inches in diameter at cruise speeds. As you might have guessed, this was a big hurdle during its development.

The invention of this engine was quite important to the field of engineering. It was the first use of directionally solidified metal which made maintenance pretty easy, the first use of self-metering afterburner spray bars, and continuous afterburning – meaning it could run endlessly as long as it had fuel.

There are about 600 pieces of plumbing on the engine full of oil and fuel. These are made up of 321 and 347 stainless which are quite easy to work with and handle heat pretty well.

Computers back in the day were not as powerful or even came close to what the J58 needed them to do. They had to use “hydraulic computers” which are 2 blocks on each side of the engine. The first block controls the afterburners and the other controls the main engine.

It uses JP7 fuel which is a highly-refined type of kerosene. Because of that, the fuel has extremely low vapor pressure which makes it very difficult to light. Its fuel also doubles as a hydraulic fluid after adding lubricity, anti-oxidation, and anti-coking additives which allow it to be stable inside the engine.

The J58 recovers around 88% of its energy with the remaining 12% lost due to heat. Its engineers found out that it didn’t need a lot of thrust at Mach 3. Therefore, they adjusted the engine so that one-half of the thrust is produced by the engine while the other half comes from the recovered energy around the outside of the engine.