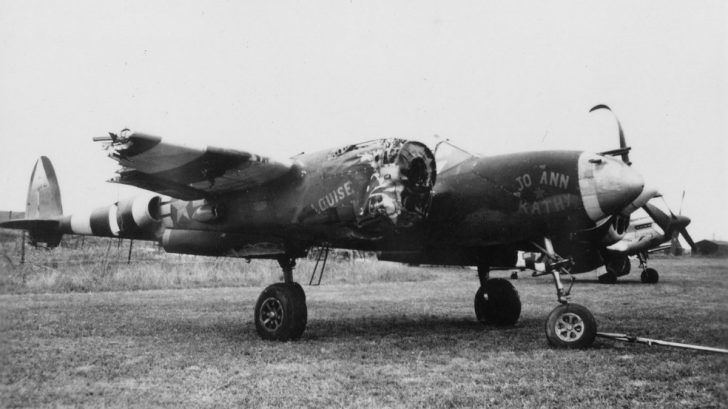 At around 6 PM, a suspicious-looking aircraft was seen flying at a low altitude. It was slowly closing in on RAF Honington in Suffolk, England. The crew on the ground couldn’t make out what the plane was or which side it belonged to. All they knew at this point, was it was heavily damaged and was somehow still flying. As the plane flew closer, the crew got a good look at what the mysterious plane was. It was a P-38 Lightning and it looked like it came straight out of a junk shop.

They noticed something peculiar about the plane. The P-38’s canopy was missing which only meant two things. Either the canopy was completely destroyed, or the pilot ejected in time moments before the ground crew saw the plane. The plane landed 200 yards away from the base with its one working propeller hitting the ground. Its second engine was blown to bits and the wing attached to it was cut in half. The crew hurriedly went off to tend to the pilot’s injuries – if there ever was one.

There Was No Pilot

As the crew arrived at the scene, they were surprised by what they saw. The battle-scarred P-38 had no pilot and the plane’s control column was jammed to the left. After further inspection, they saw that its two engines were both set to 100% with the War Emergency Power enabled. Moreover, its landing gear was fully extended, its flaps were down, and its fuel was empty. All of these findings were not as shocking as what they saw inside the plane. That mysterious piece of evidence made this case more confusing than it needed to be.

What they found inside the cockpit was a German flight book. What’s even more disturbing is the fact that the information inside the flight book was something a pilot didn’t even need. The crew noticed that the plane had the name “Jo Ann Kathy” on the side of its nose. However, as they got to its tail, they saw that the plane’s tail number was scrubbed off. Using just the name found on the nose, you’d think it would be easy to identify the P-38 but that wasn’t the case. Reports from the US Air Force stated that there were no aircraft by that name in service at that time.

The Most Probable Explanation

Since it’s still largely unsolved and kept secret by the USAF, there hasn’t been an official explanation as to what happened. Nevertheless, we can assume that the P-38 belonged to the 364th Fighter Group before it was compromised. Germans might have brought the P-38 back to Germany, scrubbed its tail number off, given it a new name, and flown the aircraft as a disguise. When the German pilot encountered problems during the flight, he could have bailed.

There’s still something quite not right about this story. If they were determined enough, they could have checked the parts and engine serial numbers.