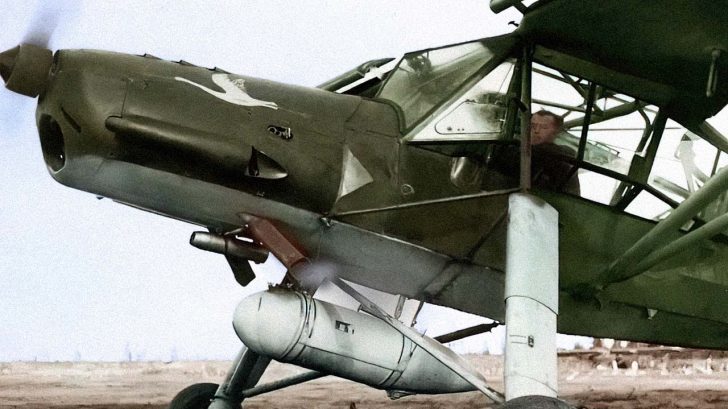 A German Ace by the name of Gerhard Fieseler continued to hone his flying skills after WWI as an instructor and then as a stunt pilot. After some time, he designed his own planes and started his own company. By the start of WWII, his company was able to produce aircraft for Germany.

Fieseler was one of the three companies competing for a bid issued by the Luftwaffe. The aircraft should be light enough to fulfill multiple roles such as liaison, evacuation, and even assault. In addition, the plane needed to have STOL capabilities to be effective in rough terrain.

The Fi 156 made an impression on the German Air Ministry for its simple but effective monoplane design. Its wing was composed of wood covered with canvas and its fuselage used steel pipes covered with linen sheathing. The defenseless cockpit housed 3 men but provided an excellent field of view.

There was only one 7.92 mm MG15 machine gun on the back of the cockpit. The Storch was also too heavy and was only capable of reaching 109 mph using its Argus As 10 engine. It became known as “The Storch” because of its fixed extended landing gears filled with oil-and-spring shock absorbers which gave it STOL capabilities.

In 1943, paratroopers were tasked to land on a mountaintop near the Gran Sasso to save Benito Mussolini. The Germans quickly took a hold of Mussolini but the Fa-223 sent to evacuate him broke down. Instead, he was ushered into a Storch and was successfully evacuated from the area.