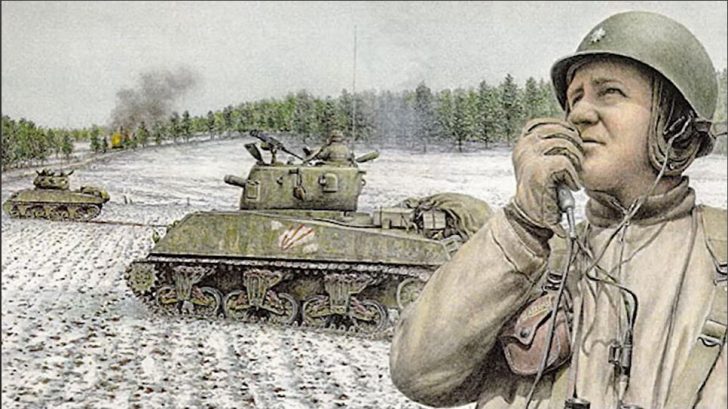 Colonel Creighton Williams Abrams Jr. as compared to his contemporaries in WWII was somewhat unorthodox. He was also best remembered as the tank commander who blazed a path to Bastogne.

Here are the ten facts about the greatest American tank commander of WWII:

1. Serving with the 7th Cavalry at Fort Bliss on the Texas, New Mexico border, Abrams quickly earned the reputation as a lead from the front and by example kind of officer

He also knows how to read his men in such a way to know how to get them quickly geared up for the tasks at hand.

2. In 1940, he joined the fourth armored division where he soon became familiar with new armored mounts

In the immediate aftermath of the attack on Pearl Harbor, 27-year-old Abrams, now an army captain, was given a temporary promotion to major in 1942. He was then made seond in command of the 37th armor regiment.

3. Barely two weeks before his 28th birthday, he was once again lieutenant colonel

He had then been given command of the regiment and was re-designated as the 37th tank battalion.

4. After intense training in the English countryside, he led the 37th into France on July 1944

Fighting with the rest of the 4th armored division, the 37th helped spearhead the breakout from Utah beach.

5. Many of Abrams’ men were aghast at how ferocious in the battle he was

One M4 driver later recalled, “During our tank battles, Abe was shooting tanks like the rest of the boys. He would mix in wherever the hardest battle was. It made us feel like fighting harder when you see a great man like Abe alongside you.”

6. His tenacity was soon recognized by the Germans, as well

Some Germans mistakenly believed that he was Jewish because of some of his acquaintances during his education. In reality, he was a Methodist.

However, the rumor that he was an avenging Jew stayed amongst the German troops, who created a fearful picture in their minds of the commander of the 37th tank battalion.

7. This was spurred on by the repeated use of the 37th as the spearhead of many attacks done by the 4th armored division now assigned under General Patton’s 3rd army

At this point, Abrams and his men have already themselves to be determined to win in battle.

8. His tenacity was put to test on Sept 1944 when the German army’s 111th Panzer Brigade attacked the 4th armored division at Luneville

This sparked the Battle of Arracourt eventually becoming one of the largest tank engagements of the war. Despite having more superior tanks, the German attack was poorly coordinated and the Americans rebuffed them.

The German tanks, unaware that their cover had been blown, emerged in the thick fog, expecting to catch Abrams and his tanks napping. However, they were in for a surprise, since the Shermans and tank destroyers were ready to fire. The battle lasted for nine days and would end in a German defeat.

9. Under Abrams’ command the 37th had become one of the most respected combat units of the European theatre

He and his men were also celebrated as heroes for their fight against Bastogne.

10. Abrams was highly decorated for his service in the war

This included two Distinguished Service Crosses, two Silver Stars, and the Legion of Merits. Meanwhile, the 37th received a Presidential unit citation for their actions at Bastogne.