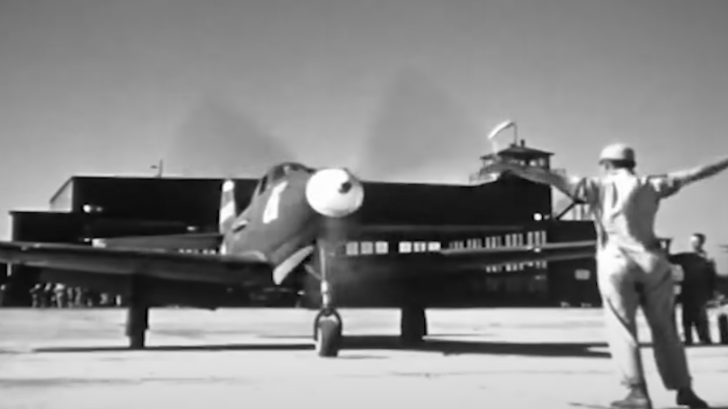 It had the highest total number of victories compared to any other US fighter. This shouldn’t be confused with the highest kill ratio which belongs to the Brewster Buffalo. Regardless, the Airacobra was a highly successful dogfighter in the hands of the Soviet Union.

2. Engine Was Behind The Cockpit

The Airacobra had a peculiar design. For most planes, their engines were at the front or on the wings. As for the P-39, its engine was located right behind the pilot. In addition, it had a tractor propeller on its nose that had a long shaft.

You would never expect a plane from that era to have the same doors as the Airacobra. While much of its contemporaries had canopies that opened from the top, the P-39’s canopy doesn’t. To enter the aircraft, you needed to use its automobile-type doors – entering it like you would a car.

One of the first planes to ever be fitted with a tricycle undercarriage was the P-39. It had a single nose wheel in the front and two wheels slightly aft of the center of gravity. These landing gears made it easier for the pilots to take off, land, and taxi. Nowadays, this configuration is the most widely used among aircraft.

It bore a resemblance with the Bf 109 in that it had a gun on its nose that poked through the propeller hub. The Airacobra was one of the first fighters made to be a “weapons system” specifically designed to house the 37 mm T9 cannon.

In 1939, Larry Bell made the controversial decision to produce the P-39s without the turbocharger. This was a big blow to the potential of the P-39 and even today, historians still don’t know the exact reason why it was removed. Some pointed to the wind tunnel tests which proved that the turbocharger had more disadvantages while some alluded to the fact that Bell’s factory couldn’t realistically produce the turbochargers in large numbers.

Further improvements to the P-39D were more armor, self-sealing fuel tanks, and better armament. This did improve its survivability but sacrificed more speed due to the excess weight brought by the changes. It was the first variant to enter service and see action.

After the fall of France, Britain shouldered the remaining Airacobra orders and the P-39 flew with the name “Airacobra Mk 1” under the Royal Navy. It lasted 2 combat operations before Britain axed the whole operation because of the Airacobra’s inadequacy.

The Soviets relied heavily on the P-39 compared to the Spitfires. Half of the highest-scoring Soviet aces had their kills using this aircraft. Notably, Grigoriy Rechkalov had 44 confirmed kills while Aleksandr Pokrshkin got 47 out of his 59 with the P-39.

Cold weather can be a bit of a problem but the Airacobra had just the thing to help in these situations. The P-39’s cabin can be heated or cooled by the two ducts located on the cockpit’s floor beneath the pilot’s seat.