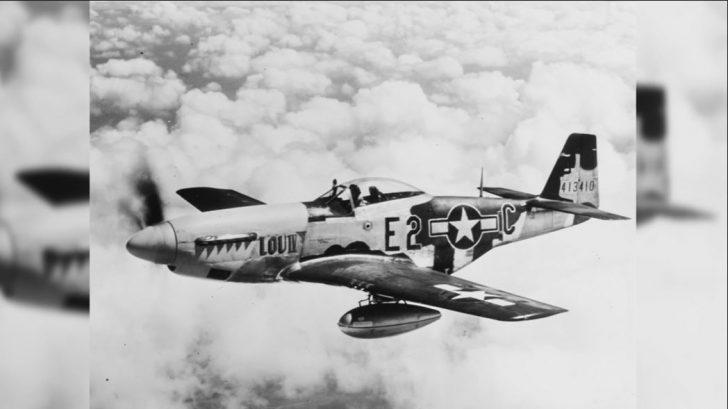 On August 24, 1944, Lt. John M. Carothers of the 503rd fighter squadron was in this P-51 Mustang. He was part of the formation returning home after a bombing run over Berlin.

But then, six Focke-Wulf Fw 190s appeared in the skies and started pursuing them. At that time, Lt. Carothers was the last P-51 escort left out of his entire formation. While the RAF Spitfires will be there to escort the B-17s, it will still take an hour or so, and they have to survive the attack.

With no other option left, Carothers turns his P-51 Mustang back to engage with the German fighters. He managed to take down two Focke-Wulf Fw 190s, but the remaining four German fighters turned their attention to his aircraft. In retaliation, they opened fire on the Mustang, causing his fuel tanks to explode and tearing the other side of his wing.

The fragments in the cockpit then hit Carothers on the chest, causing him to lose consciousness. He woke up several minutes later at 45,000 feet. He couldn’t believe that the P-51 could climb this high despite the damage. Due to the weight loss in the plane, it became significantly lighter.

Below, the remaining German fighters stalled out. Carothers tried to radio his B-17s but found that it had already been destroyed. He couldn’t radio for assistance. He knew by then that he was done. He didn’t have enough fuel to make it back home, and even if he did, he would have already passed by then due to blood loss.

He took out a log book and made a record on it, along with a small note to his family, hoping one day someone would find it. He then maneuvers his crippled Mustang down for the last time and empties his remaining ammunition into one Focke-Wulf Fw 190, cutting it in half. Carothers passes out due to blood loss as his plane crashes into the North Sea, killing him in action.

Sgt. Robert Anlauf of the Luftwaffe was so moved by Carothers’ actions to protect his remaining B-17s that he led a search and rescue mission in the North Sea. He found Carrifer’s crash site two days later, with his log book and letter to his family in a waterproof bag.

Sgt. Anlauf said that Carothers could have easily gone home. But he came back to protect his B-17s. A total of 16 B-17 bombers and 160 men would return safely that night. Lt. John Carothers was awarded the Purple Heart and the Air Medal for his single act of heroism during aerial combat.