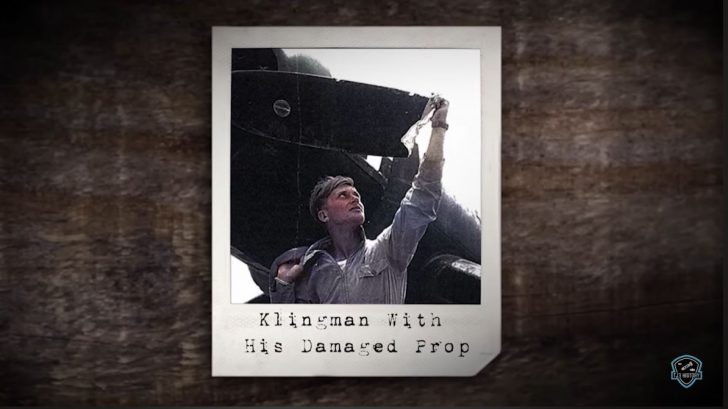 Robert Klingman was in his fighter plane, 35,000 feet above the ocean, chasing down an enemy aircraft. Finally, after an hour and a half of chase, he pulled up behind the Japanese Ki-45 only to find out that he had no weapon.

Read on to know how this amazing Corsair pilot would find a way to complete this almost impossible mission:

The Corsair’s Most Bizarre Mission

One of the airmen who took part in the Corsair’s most bizarre mission was Marine Lt. Robert Klingman, who was assigned to the legendary squadron VMFA 312, aka the Checkered Boards.

During this battle, instead of traditional attacks, this would come in waves of nightmarish kamikazes or Japanese pilots in suicide missions wrecking devastating results on American forces killing thousands of sailors and damaging dozens of ships.

This created the primary role of the F4U Corsair, defending the allies from these lethal attacks.

Klingman and other pilots participated in this mission, keeping Japanese aircraft from incurring further damage once such mission would be on May 10, 1945, when they were sent out to take down a recon plane- a Ki-45 Nick twin-engine aircraft.

However, the plane was no ordinary fighter- it was outfitted for high-level recon roll and could fly as high as possible at over 35,000 feet.

The Japanese fighter was confirmed to fly at 36,000 feet above. Once the four Corsairs made it up to 20,000 feet, their flight leader asked them to fire some of their ammunition to reduce weight and lighten their planes.

However, at 30,000 feet, two Corsairs must head back due to engine trouble at high altitudes. Their captain used most of his ammo, while Klingman had one final shot. He knew he had a speed advantage over the Ki-45, but it wouldn’t last long.

Low on fuel, Klingman also knew his plane couldn’t survive this level of throttle power for much longer. He came up close to the Japanese aircraft and pulled the trigger. But all he heard was utter silence.

The high altitude caused the lubrication of his guns to thicken, making it inoperable. He also knew he didn’t have enough fuel to make it home. So, he radioed his wingman, “I’m going to hit him with my plane.”

He pointed his nose downward, right at the recon aircraft, causing the propeller of his plane to strike the Ki-45’s fuselage and tail section multiple times. His propeller then tore into the tail section’s supporting area, sawing it off. The impact caused both planes to go into a controllable spin, hurdling them back to the ground.

After falling thousands of feet, Klingman regained control of the fighter, gliding it down to a lower altitude. With his wingman’s help, they can set a course at a nearby American airfield. At 10,000 feet, he was out of fuel, and his propeller was inoperable. His captain told him to bail out, but he insisted on a normal landing.

Miraculously, the Corsair made it to the airfield and came on safely on the runway. When he exited his plane, he was famously quoted, “It’s a hell of a way to earn a buck.” After WWII, he served in Korea and passed away at 87 in 2004.