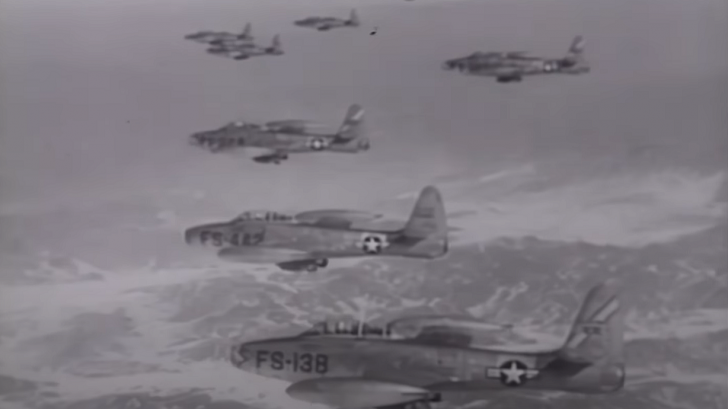 The day fighter turned fighter-bomber has now been forgotten by many. Today, we look at 10 facts you might have not known about Republic’s F-84 Thunderjet.

When the USAF Thunderbirds started in 1953, the first ever plane they operated was the F-84G Thunderjets. They continued to use the Thunderjets for two years until 1955 when they switched to F-84F Thunderstreaks. Later on, they would use the F-4 Phantoms and F-16 Fighting Falcons.

Seventeen F-84Gs flew from the United States to the United Kingdom without ever stopping to be refueled on the ground. Instead, the Thunderjets used aerial refueling to make the 4,485 mi journey the longest nonstop flight by jet fighters at the time. The 508th Strategic Fighter Wing achieved this impressive record on August 20, 1953.

3. Outclassed by the MiGs

During its first few weeks of service in Korea, the F-84s were tasked to deal with the MiG-15s. However, the US soon realized that the MiGs heavily outmatched their aircraft. The swept-wing Soviet plane was way faster and more maneuverable than the F-84s. They discovered that the Thunderjets were better used in a ground attack role.

Like the rest of the early jet designs, the Thunderjet suffered from an undesirable takeoff performance. The aircraft needed 10,000ft of runway and RATO bottles to successfully takeoff.

Thunderjet pilots had a grand time giving the aircraft nicknames. The most common was “The Lead Sled,” which might be a reference to its long runway requirement. Some more examples included “The Worlds Fastest Tricycle” and “Groundhog.” Judging from these names, it’s clear that the pilots were well aware of the Thunderjet’s problems.

Early attempts to fit a P-47 with jet engines proved unsurmountable due to the Jug’s large fuselage cross-section. Therefore, Republic decided to start from scratch and design an aircraft with a slimmer fuselage and a turbojet engine in its rear.

The project was designed to test the capability of the B-36 Peacemaker to carry an F-84 Thunderjet. The smaller F-84 would be placed in the Peacemaker’s bomb bay in a parasitic setup. When the time came, the hooks securing the Thunderjet would be removed, enabling it to fly off to drop bombs and then return to the B-36.

To give them a gentle push during takeoffs, they were given JATOs or RATOs, which stands for Jet/Rocket-Assisted Takeoff Equipment. F-84s would carry 2 or 4 of these, each able to produce 1,000 lbf of thrust for 14 seconds.

F-84Gs utilized ZLTOs to launch near-vertically with the use of rocket motors. The premise was that the rocket motors would give the aircraft much-needed speed and altitude for a flawless takeoff.

10. Had A Promising Variant

One variant called the XF-84H was derived from the F-84F. This variant was powered by turbine engines while using a supersonic propeller. On paper, it would have been able to set the unofficial speed record for a propeller-driven aircraft. Unfortunately, it never conquered its aerodynamic deficiencies and unreliable engines, resulting in its cancellation.