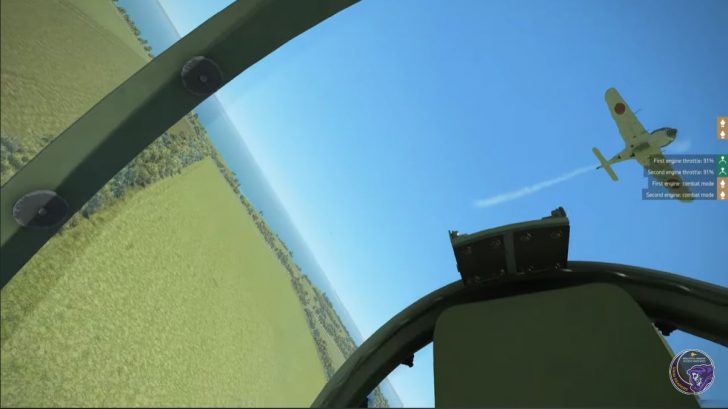 Shooting down planes was something Thomas McGuire always excelled at. He was known as one of the most decorated American pilots in WWII and the second-highest scoring ace of the war.

On August 1943, McGuire was part of the group that flew top cover for bombers striking at Wewak, New Guinea. Nearing their target, they were attacked by Japanese aircraft. He shot down two Ki-43 “Oscars” and one Ki-61 “Tony.” The next day, he shot down two more Oscars on the same location, making him an ace in just two days.

On October 1943, when trying to intercept approaching Japanese bombers, McGuire saw seven Zeroes attacking a lone P-38. He dove on the enemy fighter shooting down three. However, the remaining Zeros attacked him, severely damaging the aircraft.

While trying to bail out, McGuire’s parachute harness snagged on something in a cockpit, and he struggled to free himself, finally doing so and using his parachute at 1,000 feet. He was later rescued by a PT boat, but not without a bullet wound on the wrist and several broken ribs. He returned to service six weeks later.

Zenith of His Career

On December 1944, McGuire was one the peak of his career. He was responsible for downing seven Japanese fighter aircraft and just two victories away from Maj Richard I. Bong, the highest-scoring ace of the USAAF.

After cheating death many times, as he went on to 38 aerial victories, his achievements ultimately came to a close. He lost his life on January 7, 1945.

While leading a group of P-38s on Negros Island, his men attacked a lone Ki-43 “Oscar.” Trying to draw the attacker’s attention away from his wingman, he rapidly increased his turn rate, which was an extremely dangerous maneuver. His plane stalled at a low altitude and crashed. He was instantly killed.

Posthumously, McGuire received the Medal of Honor for his mission. All in all, there are 38 aerial victories credited to his name. In this video, you’ll see how McGuire’s P-38 Lightning took on the Mitsubishi Zero in a dogfight in this tribute re-enactment of this legendary American ace’s last moments.