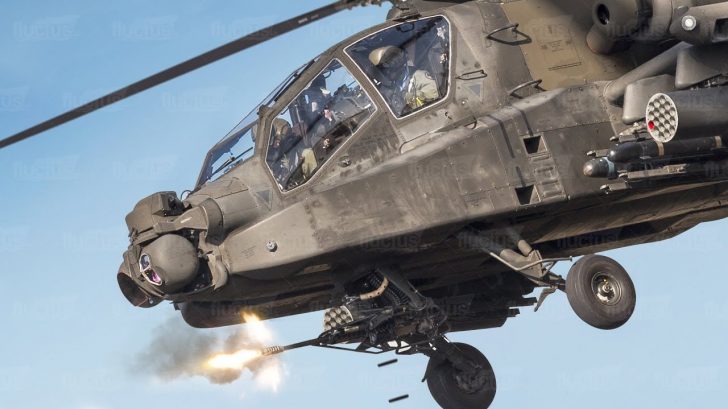 Boeing’s AH-64 Apache was introduced into the US service in 1986 and is still being operated today. In total, the Apache has flown 4.8 million hours of flight time. In those hours, 1.3 million were spent in combat.

AH-64s are fitted with sensors and infrared jammers to protect themselves from laser or radar-guided weapon systems. If in danger, the sensors would visually and audibly alert the pilot and prioritize the signal as an immediate threat. Afterward, it’s up to the crew what weapon or self-protection system they use, such as chaffs and flares.

The Apache’s M230 chain gun is fed by an electrical and automated ammunition feed located on the right forward avionics bay. Three ground personnel with ground support gear are required to load eleven round strips of bulk ammo into the gun system. This way, the crew can maintain the Apache’s combat readiness as quickly as possible.

Included in its impressive avionics are the Fire Control Radar and Night Vision System. These radars enable the crew to scan the terrain in all types of weather and time in less than a minute. It can detect up to 256 potential targets situated on the ground or even in the air.

5. Can Land On Carriers