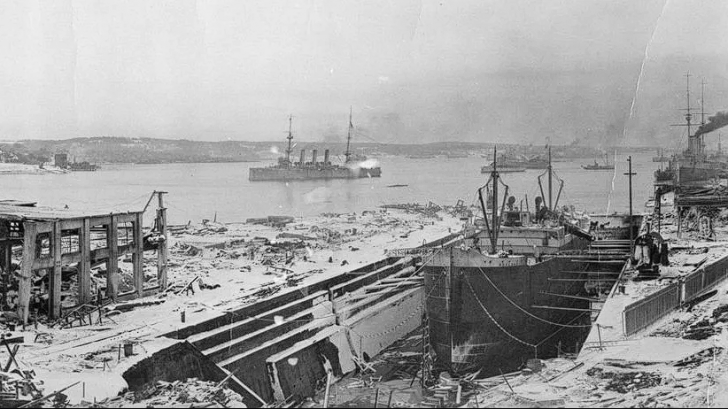 SS Imo was sailing from the Netherlands to New York to load relief supplies for Belgium. On December 3, 1917, Imo arrived in Halifax for inspection and refueling. The ship had to wait a few more days to get all its supplies delivered.

Meanwhile, a French cargo ship called SS Mont-Blanc was on its way to Europe from New York. Because of the nature of its mission, the vessel was full of explosives, picric acid, benzol, and gun cotton.

Between the two ships was a passage dubbed the “Narrows,” a small strait that offers a course into or out of Bedford Basin. On December 6, Imo was signaled to leave the basin through the Narrows. At almost the same time, Mont-Blanc entered the Narrows and soon spotted SS Imo about a kilometer away. The two ships exchanged whistles in an attempt to avoid a collision.

Both ships turned off their engines to minimize the damage of the impending crash. As a result of the collision, the barrels inside SS Mont-Blanc toppled over and began leaking. When SS Imo backed off, sparks flew inside the opposing ship’s hull and ignited the fire. Twenty minutes later, the Mont-Blanc exploded with all its explosives on board.

An explosion of a half-mile radius destroyed almost everything in its path while creating a tsunami. Around 1,600 people died, with another 9,000 injured from the blast. Thirteen thousand houses were either damaged or destroyed, rendering thousands homeless. The explosion also wiped out the Mi’kmaq community, which has lived there for generations. The estimated cost of the damages is equivalent to CA$627 million today.