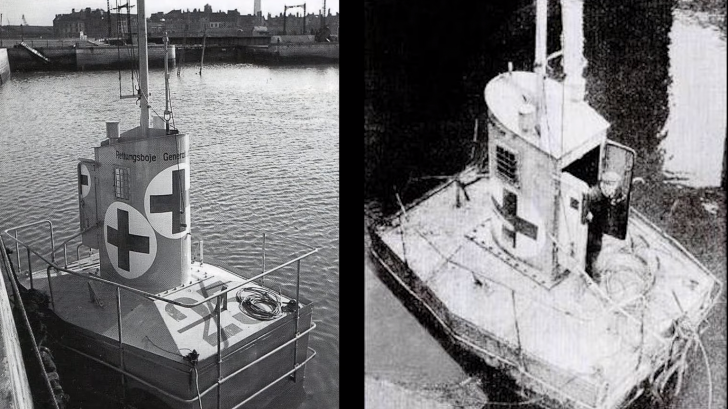 When France succumbed to Germany, the Axis powers knew Britain was finally within reach. However, in order to conquer Britain, Germany had to get control of the skies first. Both Britain and Germany were trying to gain air superiority over each other with both suffering huge losses. As the war raged on, more pilots had to bail out of their aircraft and land on water. Bailing out of a crashing aircraft is dangerous enough; Landing in the open sea between contested waters wasn’t ideal either. To help German pilots, the Luftwaffe designed the Rettungsboje or “Rescue Buoy” which was 6.5ft high, 3ft x 16ft in size, with a pole and basic supplies.

By 1941, Ernst Udet saw the importance of the rescue buoys and quickly devised a design far better than the original. It was square or hexagonal in structure, had 43 square feet of floor space, and had a cabin with a little secret.  When entering the cabin, you’ll find a ladder that leads down into a room where there were two bunk beds and cupboards full of supplies. Occupants could also play board games and smoke a pack of cigarettes if they wanted to. Udet’s importance in making the design was the reason why others called it the “Udet-Boje.”

A Lot Of Supplies

The room had 25 liters of drinkable water, plenty of ration packs, a bank of batteries for the radio, an alcohol stove for heat and cooking, and much more. The occupants also had access to chocolates and brandy for a quick morale boost. Of course, these occupants weren’t there to go on vacation. While inside, they spent most of their time hoping someone would come to pick them up. To get the attention of rescuers, they were given a signal lamp, ten flares, and a flare pistol complete with 40 cartridges. There are also railings on each side of the buoy for someone to cling on or use to climb with. On the base, the occupants can raise a yellow and red flag to signal the rescuers. Later designs were fitted with automated radio transmitters and numbered for identification.

In one instance, a rescue buoy was converted into a small guard post. It was seen in Braye Harbour, Alderney, and had three men inside operating a machine gun. These buoys were also featured in at least two war films. A movie, “One Of Our Aircraft Is Missing,” shows the buoys in extreme detail. According to the director’s biography, they were helped by the Admiralty when designing the set.

The British also developed their own version, called the Air-Sea Rescue Float. British ASRs were 32ft long and weighed 10 tons due to their quarter-inch welded steel material. Britain made 17 ASRs and altered five more German rescue buoys during the war. The ASR-10 was converted into a yacht in 1950 and can now be seen in Scottish Maritime Museum today decorated with its wartime colors.