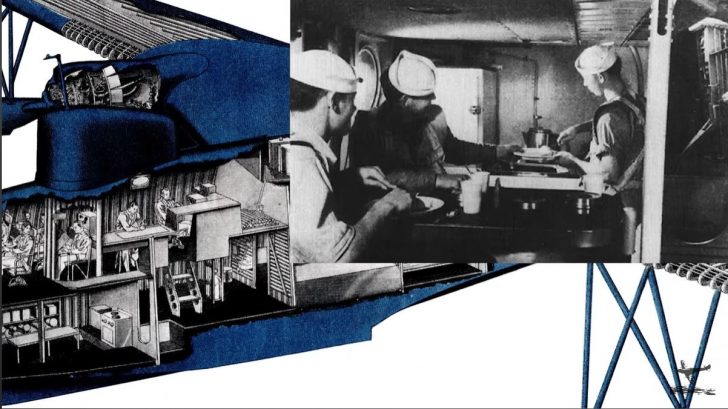 The Martin PBM Mariners was a majestic aircraft so large that it doubled as a floating home for the crews that operated them. Not many military planes have their own kitchen.

However, despite distinguishing itself in WWII, it would never reach the same popularity as its older cousin- the PBY Catalina. Its postwar legacy is also marred by several accidents.

Here are the ten facts about the Martin PBM Mariner, the plane that came with a kitchen:

It also had unique bomb bays in the engine that could carry 4000 lbs or 1800 kg ordnance and a double-deck hull replete with all the facilities needed for long-range missions.

2. It was well defended

It had provisions made for five defensive positions, each holding a 50-caliber gun. One was found in the nose turret while the other was in a dorsal turret. Two were installed in waist positions, and one final one was in the tail.

3. Lifting this bulk in the air was a pair of newly introduced Wright R-2600- Cyclones

Each one put out a generous 1600 hp and drove three-blade Hamilton Standard propellers.

4. The first Mariners found themselves operating in near-wartime conditions

The US was expanding the range and scope of naval patrols to help protect shipments of material to Britain against the German U-boats.

5. While they’re built in the smallest numbers, PBM-1s were perhaps the most recognizable variant because of their retractable floats

Although they help reduce drag during the flight they couldn’t withstand repeated buffeting of water operations.

6. The crew found that life aboard the Mariner is like being aboard a ship than a plane

The crew spent a lot of time aboard- missions can take up to fourteen hours depending on the fuel load and the weather.

7. The aircraft came with a suite of facilities

Although it’s not luxurious by any means, it made life abroad more bearable. There’s a sleeping cabin that held four bunks. The Mariner also had a full kitchen complete with a small stove, pantry, etc. where one of the crewmen can cook and prepare meals.

It was a plane where nine of its occupants spent many hours, days, or even months in each other’s company. This meant that they were among the most tight-knit and family-like crews in service.

9. The PBM-5 was the first Mariner to have the provision for jet or rocket-assisted takeoff

Rocket-assisted take-off allowed Mariners to get up its speed with higher loads. This meant that they could either bring more fuel, payload, or both depending on the mission requirement.

The PBM-5 was also the mainstay of Naval patrol squadrons in the last year of the conflict.

10. The PBM Mariner had a service life that lasted two decades

It served as a patrol aircraft, naval bomber, rescue plane, and submarine hunter. It also became a flying, floating home away from home for its crew.

Despite its contribution to the war effort in both the Atlantic and Pacific theaters, it had fallen into obscurity partly because of a series of fatal accidents that occurred throughout its service life. It gained a reputation as somewhat of a widow-maker in its final years, eventually damaging its reputation.

Only one PBM Mariner survives today, and can be found at the Pima Air and Space Museum.