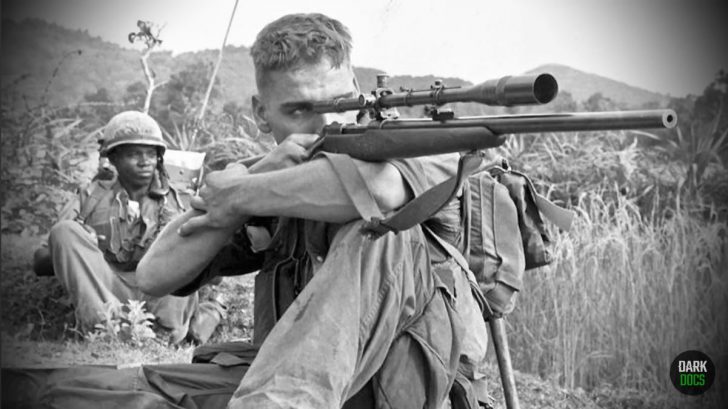 Carlos Hathcock gained notoriety as the most feared American sniper in the Vietnam War. He had a record of 93 confirmed kills, ultimately making him a US Marine legend.

Here are the ten interesting facts about the White Feather, America’s most hardcore sniper:

1. Hathcock taught himself to shoot and hunt from an early age

This was mainly born out of necessity to help feed his family. Throughout his childhood and early adolescent years, he and his dog would venture into the Arkansas wilderness.

The young Hathcock pretended to be a soldier hunting imaginary Japanese soldiers using a 22-caliber J.C. Higgins single-shot rifle that his father brought back from service in WWII.

2. Hathcock enlisted in the US Marines and won several shooting championships and prizes such as the Wimbledon Cup

This was the most prestigious award given for the long-range shooting.

3. He took part in two Vietnam tours and volunteered for so many dangerous missions

In fact, he never took a day off and at one point, his commanding officer had no choice but to restrict him in his quarters.

It was using this rifle wherein he set the record for the longest confirmed sniper dispatch at 2500 yards, a record that remained unbroken for 35 years. On some occasions, he also used an M2 Browning machine gun.

5. As Hathcock gained notoriety in the Vietcong, and the North Vietnamese army, the enemy started referring to him as the “White Feather “sniper

The enemy referenced the white feather that Hathcock used to carry on a white band in his bush hat.

6. The feared White Feather sniper so many lives that he soon had a bounty on his head

Although rewards put on American snipers usually range from $ 2,000-8,000, Hathcock’s head was worth $30,000. Hathcock held the record for the highest bounty during that time, and pretty much took down every marksman that tried to get him.

7. On one occasion, many marines in the same area decided to wear the distinctive white feather on their hats, deceiving the Vietnamese

It also further complicated the counter sniper’s job to take down the White Feather sniper.

8. Hathcock wasn’t the only feared sniper lurking within the Vietnam jungle

On the Vietcong side, there was also an alleged female platoon leader, interrogator, and sniper. The marines nicknamed her “Apache.”

Apache was known for her sadistic methods while operating in the Vietnamese jungle even before Hancock arrived. She would often place herself near US Army bases to ensure that the other American officers could hear the agonizing screams of her victims.

9. Hathcock was chased by another feared North Vietnamese counter-sniper known as the Cobra

The Cobra used the powerful Nagant 9130 rifle with a scope. The feared gunman made it his personal mission to take down Hathcock.

Unfortunately for the Cobra, he was taken down by Hathcock- the bullet went straight through the his scope and hit him right between the eyes.

10. An amphibious tractor incident left Hathcock with burns on 43% of his body, some of which were third-degree, ultimately ending his career as a sniper

On September 16, 1969, the amphibious fighting vehicles he and his team were riding struck an anti-tank mine, bursting into flames.

Hathcock went back and forth, enduring the flames, pulling seven marines from the vehicle before collapsing in a rice paddy. For his bravery, he received the Purple Heart followed by the Silver Star.