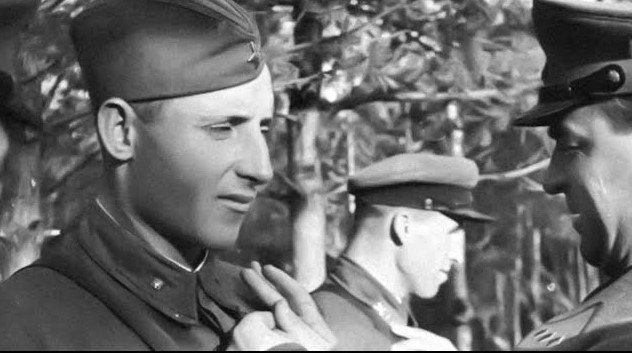 Ivan Pavlovich Sereda’s job was to cook for hungry Red Army soldiers, but he became the Soviet Union’s most unlikely hero by destroying a tank with just an ax.

Sent to the Front

In June 1941, the Germans launched Operation Barbarossa, invading the Soviet Union. Sereda was sent out to the front, not as a soldier, but to feed the troops assigned to the 91st Tank Regiment, 46th Tank Division, 21st Mechanized Corps.

During the summer of 1941, Serada’s unit was sent out to do maneuvers. As the cook, he was the only one allowed to stay back, preparing food for the soldiers’ return.

Sereda hid behind a tent are two Panzer tanks rolled right past the camp. The third, on other hand, stopped, and the commander got out to look at the camp. He knew that he had to make a move, fast. Since his rifle was out of reach, he grabbed a nearby axe.

Sereda ran from his hiding spot to the commander. The German ran back to the Panzer, firing indiscriminately.

However, Sereda was behind the gun, unharmed. He found a tarp and threw it over the tank’s turret. He then used a piece of cloth and his chef’s apron to cover the tank’s vision ports and started hacking the machine gun with his axe.

The Germans didn’t stop firing as Sereda hacked away. Soon, it eventually bent backward and became inoperable. Amazingly, he managed to take down a feared German Panzer tank with nothing but an axe.

Sereda pretended to ask his comrades to throw tank grenades. He would then answer back with different voices. The terrified Germans, thinking they were outnumbered, opted to surrender. He then forced them to tie each other up.

When his comrades arrived back in the base camp, they were astounded at what the brave cook had accomplished. After the incident, his superiors made Sereda a scout in the Red Army, and soon became platoon commander. He fought in the Battle of Moscow and the Siege of Leningrad and was awarded the Order of Lenin.