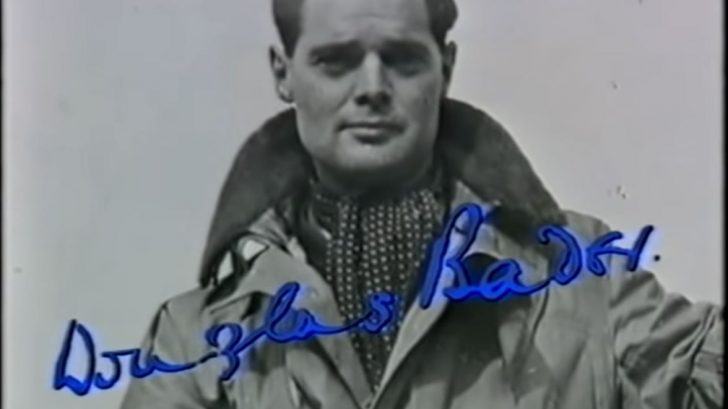 Douglas Bader was one of the most popular pilots of the RAF, well-known for his daring RAF raids and repeated attempts to escape as a prisoner of war during World War II.

Here are the ten interesting facts about this legendary WWII pilot.

1. At the war’s end, Douglas Bader was cast as a hero of this country’s greatest victories

2. Both of his legs were amputated by age 21

While training to defend his Hendon Air Show ‘Pairs’ title, he lost both legs because of a misjudged plane maneuver. Despite warnings not to do acrobatics below 500 feet, he did a slow roll that caught the tip of his plane’s left wing on the ground.

3. Despite making a miraculous recovery, the RAF wouldn’t let him fly with artificial legs

This was a devastating blow to the young man, who soon left the Air Force in 1933. When war broke out in 1939, Bader was back in the Air Force after eight years of intense frustration.

4. He became a Squadron Leader in the Battle of Britain

By the end of 1940, Squadron 242 managed to take down 67 enemy aircraft after losing six pilots. His squadron was awarded nine Distinguished Flying Crosses and one Distinguished Service Order.

Bader memorabilia like signed photographs are being sold over Britain. Articles about him regularly appeared in the national press.

6. He was involved in a dogfight over the coast of France, where he lost his right artificial limb

His plane was severely hit, and he needed to bail out from his Spitfire, losing his right artificial limb. He was then captured by 3 German soldiers who took him to the nearby hospital.

7. The Germans allowed the British to send a new prosthetic leg for Bader

German officers had such high regard for the man that they arranged for British officials to send him a new prosthetic leg.

For them, it was a propaganda coup- they treated him like a celebrity and invited him to dinner. The RAF was able to deliver along with the leg socks, powder, chocolate, and tobacco.

8. He repeatedly attempted to escape

As a POW, Bader made it his mission to frustrate the Germans as possible or ‘goon-bait’ them. He was regularly involved in planning and attempting escapes. Despite his condition, he once did get away, escaping from a work party, forcing the Germans to send a nationwide warrant for his recapture.

9. A decade after WWII, one of the best-loved British films ever made was about Bader

The story is about how one man lost his legs in a terrible accident and fought back to become a wartime ace. The film turned Bader into a worldwide star and a legendary British hero.

10. He later became a prominent campaigner for disabled people

In his later years, he was an active campaigner for people with disabilities, especially in workplaces.