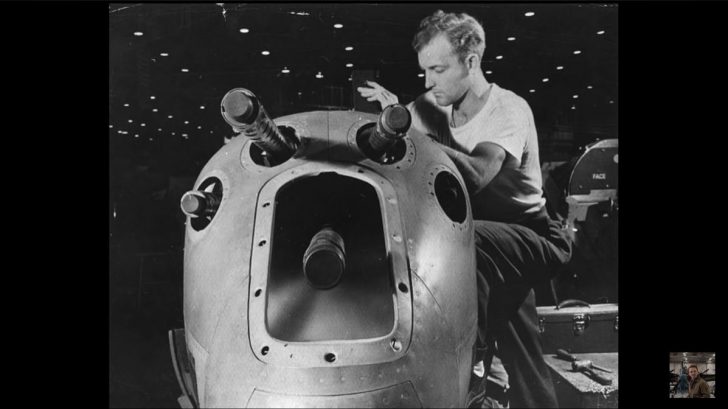 During WWII, the US had a special relationship with the 0.50 caliber M2 Browning.

In fact, the US Armed Forces continue to use it even today. From an offensive standpoint, this had been used by fighters like the P-51 Mustang. It’s also been used as a defensive weapon on bombers like the B-17 Flying Fortress.

But now and then, a question would pop up which one is significantly better, 0.50 cal or cannons?

During the Battle of Britain

During World War I and the interwar period, the .50 cal was highly reliable. The US stuck with the 0.50 cal even during WWII when others didn’t.

The British Commonwealth forces, on the other hand, started switching to the 20 mm Hispano cannon, making it their primary plane weapon. The RAF noticed that even eight light machine guns weren’t scoring as many kills.

Thus, they decided that a 20 mm cannon was necessary to defeat German forces as German planes started getting more armor. The Brits were unsure whether the 0.50cal would be enough.

Furthermore, as armor started being introduced, no one could tell whether or not a .50cal was going to be effective against it. The 20 mm cannon was considered a future-proof concept.

Never Give a German a Cannon

From the other side, the Germans realized that if they wanted to limit their aircraft’s weight, they would need to rely on fewer guns. To do that, they need to take on guns with plenty of destructive power, hence the 20 mm cannon.

The MGF, MGF-M, MG151-20, and the later MK-108 cannons were introduced. A single hit from these weapons meant the end. This weapon worked well against fighters and heavier planes like bombers.

There are some discussions on what was better, the British Hispano or German MG 151-20. Both guns and ammunition worked differently, fulfilled a different purposes, and did well. However, they operated on the same principle- dispatching an enemy plane quickly with relatively few hits.

Both the Brits and the Germans went with 20 mm cannons for their own reason, which had some overlap.

Thoughts About The 0.50 cal

Although 0.50 cal isn’t the most efficient gun for its size and weight, there are other aspects of it are often ignored, such as its accuracy, range, reliability, and cost-effectiveness. It had good penetration potential and ballistics, and there was plenty of force behind these rounds, although not as much as a 20 mm AP around from a Hispano.

It had logistical advantages too- almost all US aircraft used the same ammunition, making the production pretty straightforward. However, it doesn’t mean that it doesn’t come with limitations. For instance, most Germans would rely on armor to protect them from 0.50 cal fire. A 20 mm shell, on the other hand, could go through that armor.

To sum it up, the Germans went with the cannon because they wanted a lot of potential behind a small number of guns. Germany compensated for the bomber threat by using cannons of a higher caliber to increase the chances of a one-pass, one-kill on heavy bombers.

On the other hand, the US thought that the best solution was to place a lot of heavy machine guns on their aircraft. It had an excellent overall performance, and more guns and bullets can quickly compensate for any deficiency. Thus, in WWII, the 0.50 cal was great for US aircraft based on operational and tactical needs.