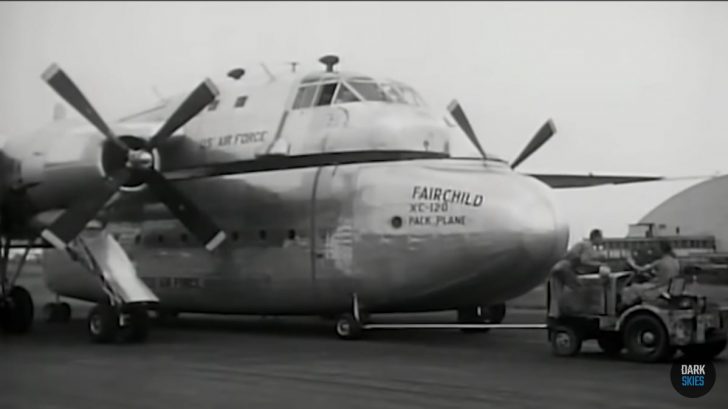 One of the most unique, and unusual aircraft of its time, the XC-120 Packplane was an American experimental transport aircraft. It was a converted C-116 with a detachable cargo compartment.

Here are the ten facts about the most bizarre yet brilliant military cargo aircraft ever built:

1. It was one of the most unusual transport aircraft to ever take the air

What set this all-metal twin-engine XC-120 Packplane from the rest were the detachable cargo pods that could be installed below its fuselage, and used in place of an internal freight compartment.

2. It would serve as an airborne tractor-trailer

The plane can pick up and quickly deliver cargo-filled pods.

3. It retained the C-119’s twin-boom configuration

However, the new aircraft was fitted with an entirely new, significantly reduced central fuselage with a flat bottom.

4. Specialized cargo pods could be placed depending on the cargo and the missions

They could also be optimized for heavy cargo, personnel, and even troops and equipment via parachutes.

With a planned maximum gross weight of 64,000 pounds, 30 percent of it was for cargo capacity.

6. The Packplane was operated by a five-man crew

It was replaced with a new four-wheel undercarriage from scratch with all components built into the type’s twin booms.

With this landing gear used to accommodate different-sized cargo pods, the plane’s ground clearance could be adjusted by either raising or lowering the landing gear’s height.

8. The large cargo airship made its public debut in 1951 at the Long Island Industrial Exposition

In an effort to help with the need for blood, US Army Chief of staff General George C. Marshall pushed a new donor program. The Packplane became the country’s first flying blood mobile.

9. It was intended to be deployed by forward landing fields

It was expected that the aircraft would quickly deposit its detachable pod and take off again which significantly reduces its loiter time on the ground since cargo aircraft are most vulnerable during laborious unloading missions.

While the forward ground personnel is unloading the pod, the Packplane would make another trip to get a new one. The idea is that on its way back to the forward base, it would drop off the new pod, returning with the emptied one.

10. The Germans also came up with their version of the legendary XC-120

The German manufacturer Gerhard Fieseler Werke created the Fieseler Fi 333. It featured a long, and slender fuselage fitted with a fixed tailwheel undercarriage.

Although the plane was built to transport modular cargo contains similar to its American counterpart, the plane’s proposed cargo pods are considerably smaller. Unfortunately, the plane never got beyond the drawing board.