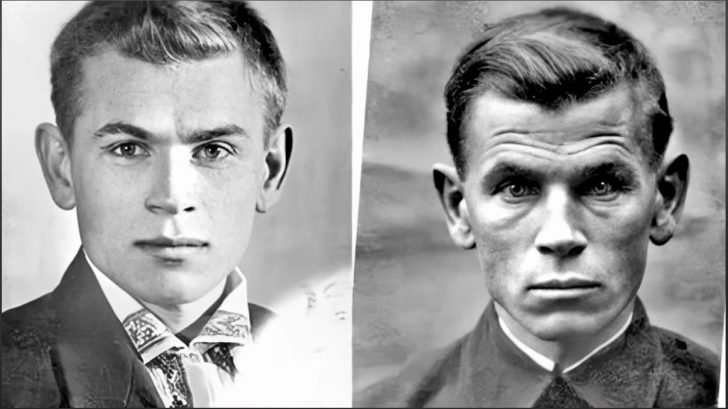 During World War II, hundreds of thousands of soldiers as prisoners of war faced starvation, abuse, and in some cases, total abandonment.

His name may not be found in some history books covering WWII, but Evgeny Stepanovich Kobytev’s haunting before and after photographs captured the entire war’s darkness.

Kobytev enlisted to defend his homeland but was captured and imprisoned at the brutal concentration camp in Khorol. He survived and returned to the Red Army, yet the soul-destroying effects of war had never been more crystalized in his before and after photographs.

The first was taken in 1941 before entering combat and another one was taken 4 years later.

Zamperini was stranded along with two other men were stranded on a life raft in the Pacific Ocean for 47 days. They had to fend off shark attacks and survive on rainwater and raw fish. When they washed ashore, they were soon kept in a Japanese Prisoner of War camps.

Zamperini contracted beriberi during his time there, was assumed dead, and was one of the few living participants to get a posthumous Purple Heart.

3. The Trauma of Capture

One of the darkest experiences soldiers have to face was being captured. Those that are shot down from an aircraft face the fear of being hunted by the enemy after the trauma of a plane crash. Sailors face a similar experience, watching their ships capsize.

These men were subjected to a different kind of horror than any other soldiers in WWII. Stalin ordered all Soviets must ‘fight to the last,’ which meant that by law Russians couldn’t surrender, and anything less than victory or death meant an abandonment of one’s duties.

Forced malnutrition and trauma on the POWs significantly altered their health. Most experienced musculoskeletal and gastrointestinal disorders.

Many POWs also experienced psychiatric and mental difficulties. Those who fought in the Pacific theater show rates of depressive symptoms up to five times higher than the general public. The rate of PTSD in POWs is also 35-50% higher.