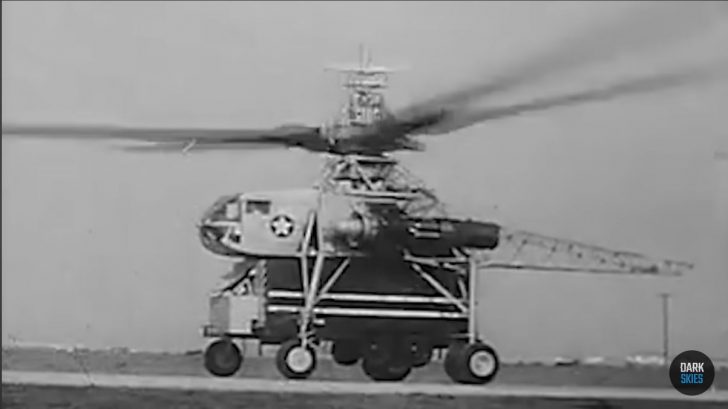 The Hughes XH-17 Sky Crane was the first-ever helicopter project of the Hughes Aircraft Company. It featured a two-bladed primary rotor system with a diameter of 134 feet and holds the world record for the biggest rotor system.

The XH-17 was an ambitious project by the US Air Force. The idea was to develop a powerful aerial crane that can lift large amounts of supplies and even artillery units for America’s war efforts. The helicopter manufacturer Kellet first developed this project but soon ran out of funds.

In a twist of fate, Howard Hughes bought the design and its earlier prototypes. The ambitious project then started to gain traction.

The Hughes XH-17 Sky Crane was designed with an excellent propulsion system that could carry loads surpassing 50,000 pounds.

The XH-17’s maiden flight was a historical occurrence as not only it featured the biggest rotor in any aircraft, but it also was the signal to the birth of the Hughes’ aircraft helicopter division.

As the blade-tipped jet engines on the helicopter flared up, and a burst of flames was propelled from the ends of the rotor blades, the most promising rotor aircraft was ignited. The noise it made was so deafening that it could even be heard miles away.

The event proved to be a tremendous success and although the project would be canceled soon after, the objective was achieved. Hughes Aircraft started its helicopter enterprise and proved that its particular propulsion system worked. It also became an excellent starting point for many large helicopters in the era.