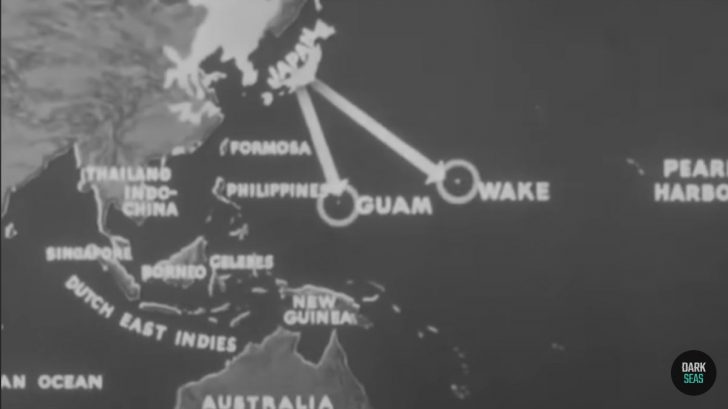 The valiant defense of US marines, soldiers, sailors, and civilians in Wake Island became a rallying point and boosted the nation’s morale back after the dark days of Pearl Harbor.

Here’s how this tiny island with battleship guns managed to beat Japan for 15 days all alone:

Wake Island is a small and lonely island lying about 2,000 miles west of Hawaii just halfway of Japan. Japan soon set its sights on it due to the Japanese-occupied Marshall Islands.

When the Japanese finally struck, the United States was unprepared. It only had 449 US Marines, several dozen Navy personnel, a handful of army radio operators, and 1,100 civilian workers there to defend the island.

The Japanese finally struck Wake Island, and although the defenders knew what happened to Pearl Harbor earlier, they were largely unprepared for the incoming assault.

A raid of enemy fighters soon came in, catching a large part of the Island’s fighter squadron on the ground. Wildcat fighters parked along the runway were destroyed.

However, the defenders didn’t surrender and unbeknownst to the Japanese, they secured the naval guns from the old battleship USS Texas and still had four Wildcats to help them hold ground.

The Japanese conducted bombardments along the coast. Flagship Yubari turned to face the island, closing in. The Americans then opened fire, and the flagship was forced to retreat.

On the eastern tip of the atoll, Major PS Devereux ordered his men to hold fire until the enemies moved within range. Then, at a distance of 4,000 yards, the 5-inch coat defense guns opened fire hitting Hayate directly on her magazine twice. The destroyer split into two and did not take long to sink.

Oite began to retreat but she was also severely damaged by 50-caliber machine guns. Accompanying ships followed, but they too, endured heavy damage as they sailed away. On the northern tip, Japanese battleships were repelled with the help of the remaining Wildcats.

Taken aback by the unexpected turn of events, the Japanese withdrew. But when the ships turned around, one of the Wildcats dropped a bomb on top of Kisaragi, setting the vessel ablaze. The event caused the Japanese Rear Admiral to be compelled to ask for reinforcements from the same fleet that attacked Pearl Harbor.

Meanwhile, the US Navy was stretched thin, with the nearest naval support on the Californian coast, and not the Hawaiian base anymore. Soon after, the American relief forces were ordered back to Pearl Harbor as they couldn’t risk engaging in a much superior force, and the garrison at Wake Island was abandoned to its fate.

A massive task force comprising 2,000 troops harassed the atoll and more Japanese men joined them. The fighting was fierce, and the Americans soon surrendered. While the Americans were defeated, it also came at a great cost to the Japanese Navy- the destroyer lost two destroyers and no less than a thousand lives. In contrast, the defenders only lost a hundred men.

Those who survived the ordeal became prisoners of war, and some were evacuated to China and Japan. The US military never attempted to retake the atoll. It was only two days that Japan surrendered when the Japanese forces finally lowered their flag.