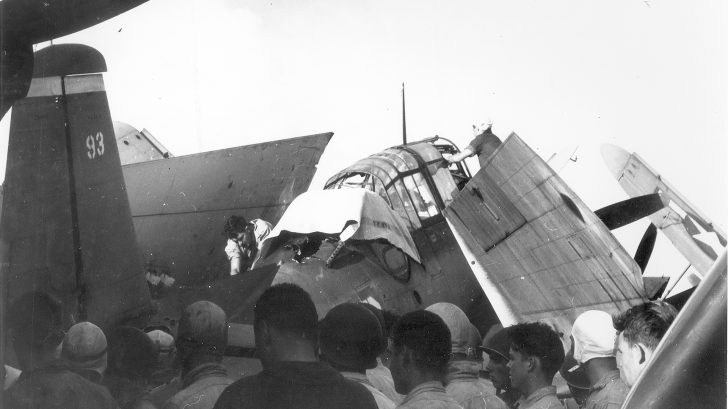 Loyce Edward Deen first worked for the Civilian Conservation Corps and the Douglas Aircraft Company before he joined the US Navy. Deen underwent basic training in San Diego and enrolled in a gunner’s school to learn about the weapons systems aboard the Grumman TBF Avenger. On April 29, 1944, Deen reported for duty aboard USS Essex.

The Air group Deen was assigned to had its most intense fights during the Battle of Leyte Gulf in late October 1944. During the battle, Deen was hit by shrapnel and wounded his foot. Still, the gunner patched it up and went to fight the very next day.

Almost two weeks later, Deen was given the option to stay on the hospital ship to recover from his injury. Unsurprisingly, the determined sailor refused to remain and rejoined his unit. Loyce Deen would then climb into his gun turret for the last time on November 5, 1944.

While his Avenger was under anti-aircraft fire from a Japanese cruiser, Loyce Deen was shot twice, killing him instantly. Lt. Cosgrove had to fly the Avenger back home through two thunderstorms before they landed on USS Essex.

When the aircraft arrived at the deck, the crew saw the mangled body of Loyce Deen. His remains were nearly impossible to disentangle from the destroyed turret. Therefore, for the first time ever, a decision was made to bury a gunner inside an aircraft while at sea. After his fingerprints and dog tags were taken, the Essex crew paid their respects and pushed the plane over the side.