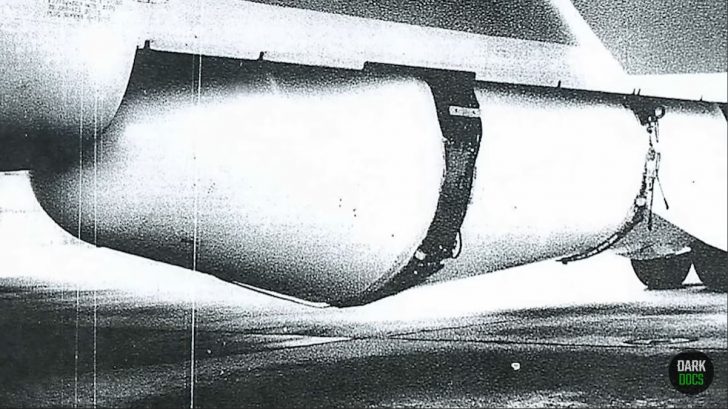 Long-range heavy bombers such as the B-52 C were used by US Air Force for classified projects during the Cold War. It was used to carry a one-of-a-kind payload known as the Flashback Test Vehicle.

The US had secretly developed its most ambitious project yet, a 100-megaton bomb that uses this unique device as means to test the bomb’s yield without the Soviets knowing about it.

Learn more about a secret nuclear bomb so big, it didn’t fit in America’s largest bomber:

In the last months of 1958, the nuclear arms race reaches a breaking point, with both governments being preoccupied with possible atomic havoc.

The Most Powerful Bomb

The Soviet Union announced that it was ready to detonate the most powerful bomb ever fielded. The 50-megaton bomb was named the Soviet Tsar Bomba.

In November 1961, America’s interest in developing a nuclear weapon more potent than the Tsar Bomba was revitalized. Sandia National Laboratory which specialized in everything related to nuclear weaponry suggested that a bomb of 30 or 50 megatons can be successfully deployed by a B-52 aircraft.

However, it would need drone parachutes for the pilots to survive the danger zone. A series of nuclear tests were then deployed to develop the bomb.

The “Flashback” was designed by Sandia labs and was America’s version of the Tsar Bomb. In fact, it was so huge that it couldn’t fit the B-52 bomb bay. The bomb bay door also needed to be removed.

Unknown if a Drop Ever Occurred

The Flashback Test Vehicle was intended to be dropped in 1967 in Operation Paddlewheel but it was unknown if such a drop ever happened.

Sandia’s objective was to drop a parachute to do its purpose of a laydown bomb that would gently hit the ground and explode after a specific period of time so that pilots have time to escape the targeted area.