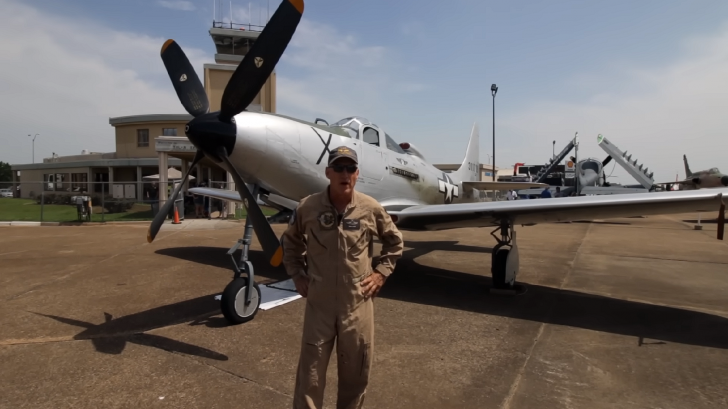 Thanks to Mark Allen, we are given a detailed walkaround tour of the Commemorative Air Force’s P-63. Here are the ten things you need to know about the King Cobra:

1. F Variant has an enlarged tail

The CAF’s P-63 is an F variant, featuring a larger vertical tail than other versions. This change came with the introduction of the Allison V-1710-135 engine, which was more powerful than the P-63A’s V-1710-117 engine.

2. Built around the gun

Like the Warthog, the King Cobra was designed around its main armament – the 37mm automatic gun. Its gun is located in the nose and fires through the center of the propeller. Aside from the 37mm, another two synchronized .50-cal machine guns can be found in its nose.

3. Engine is behind the pilot

Usually, WWII-era aircraft would have their engines in front of the pilot. However, the P-63’s 37mm gun prohibited the placement of the engines at the front. Instead, the King Cobra’s Allison engine was fitted at the back of the pilot.

Though its 37mm rounds stayed in the magazine after firing, its .50-cal shells did not – and they weren’t discharged out of the fuselage, either. Its spent rounds were stored internally in a “Cartridge Eject Chute” underneath the gun components and were removed after landing.

The P-63 and P-39 both share many similarities, one being their tricycle landing gear configuration. Most single-engined fighters had no room in the nose for a nosewheel, but those didn’t apply to both aircraft. Moreover, the P-63’s propellers measured 13ft in diameter, so landing would have been difficult if not for the nosewheel.

The doors to the P-63’s cockpit are similar to a car’s doors, and just like the latter, the former can roll its windows down. Pilots could fly with the windows down if they wanted to, but they wouldn’t be able to roll them up mid-flight because of the overwhelming air pressure.

7. Successfully used by the Soviets

Soviet P-63s achieved their first air victory in the Pacific theater on August 15, 1945, against a Nakajima Ki-43. While in Europe, the Soviet’s combat tactics scored them many aerial victories over several types of German aircraft.

8. Served as targets for American forces

Its primary use in the US was as a manned flying target for gunnery practice. The King Cobra was painted bright orange and had its armament and regular armor removed. It would then be fitted with sensors to detect hits and over a ton of armored sheet metal, earning it the nickname “Pinball.”

Almost everything inside the aircraft is electric, from the flaps, and landing gears, down to the pumps. One exception to this is the aircraft’s hydraulic brakes.

10. The most produced fighter plane to not see combat with the USAF

It ultimately came down to two reasons: it had a shorter service range, and its performance was inferior to the P-51 Mustang currently in production. In 1944, the USAF deemed the King Cobra unsuitable as a front-line fighter, leading to most P-63s being sent to Russia and France.