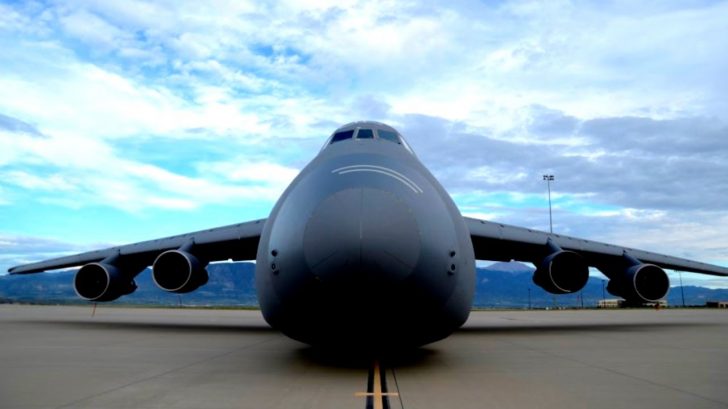 The Lockheed C-5 Galaxy is among the largest military aircraft in the world. Here are ten facts about America’s largest strategic airlifter currently in service:

1. One of the largest in the world

It’s pretty hard to imagine how massive the C-5 truly is. For context, the C-5M Super Galaxy measures 247ft in length – 12ft longer than the largest passenger airliner in the world. Each of its wings is more than the size of a basketball court – measuring 222.9ft in total. Oh, and it’s six and a half stories tall.

2. Had its engines upgraded

In order to maintain this massive aircraft, Lockheed decided to include a very advanced maintenance diagnostics system. The system can record and analyze data from more than 7,000 test points, shortening the maintenance and repair time of the aircraft.

The Galaxy’s advanced glass cockpit features a mission computer, a multimode communications suite, a digital autopilot, multifunctional display units, and many more. In addition, the cockpit also has integrated data link capabilities and situational awareness displays to increase the combat effectiveness of the airlifter.

Five sets of landing gears totaling 28 wheels are fitted on its undercarriage. Most of the landing gears turn 90 degrees for an inward retraction during takeoffs, saving space inside the aircraft. Moreover, the crew can deflate its wheels mid-flight to suit the conditions of the designated airfield.

6. Almost had a version for civilian use

One variant of the Galaxy, called the L-500, was supposed to be the civilian version of the C-5. This variant would have carried almost a thousand passengers, a considerable increase compared to the A380. However, the aircraft was considered to be almost unprofitable due to its low fuel efficiency.

7. Can carry a space shuttle orbiter

Aside from designing a civilian version, Lockheed engineers also thought of a way for Galaxies to carry space shuttle orbiters. Two C-5As were modified into the C-5C by adding containers that could safely carry the intended payload. However, the design was rejected in favor of the Boeing 747.

8. Considered as a launcher for ICBMs

The first air-launched ballistic missile test involving the C-5A was done on October 24, 1974. During the trial, the Galaxy dropped an 86,000lb Minuteman ICBM from 20,000ft over the Pacific Ocean. Though the test was successful, it was never pursued again due to engineering and security difficulties.

In some instances, the C-5s were tasked to transport F-117 Nighthawks from Lockheed’s facility in Burbank, California, in the middle of the night. These stealth fighters would then perform flight tests secretly in the Nevada Desert.

The 50ft-long, 40-ton Deep Submergence Rescue Vehicle 2 was built to provide a way to rescue submarine crews beneath the ocean. While in service, the DSRVs can be transported by C-5s to anywhere in the world in under 24 hours.