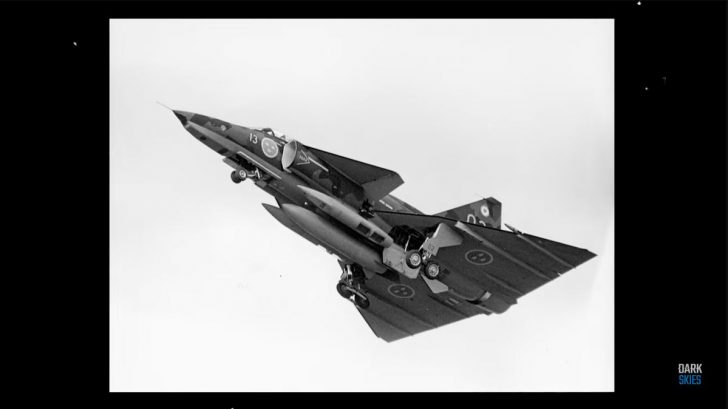 The Saab 37 Viggen was a single-seat, single-engine, short-medium-range combat aircraft developed by Sweden during the Cold War era.

Onto the Next Big Thing

After developing the Draken, the Swedish Airforce immediately set the requirements for its next-generation combat aircraft.

The plane was planned to be adaptable to all tactical mission roles, with an integrated weapon system that would operate in conjunction with Sweden’s national electronic air defense system, the STRIL-60.

The Saab 7 Viggen was a single-engine, short-medium-range combat aircraft with a radical design featuring an aft-mounted double delta wing.

To keep the landing distance short, the Saab 37’s airframe included a thrust reverse to slow the aircraft down. The thrust reverser can be utilized to taxi backward, similar to a car.

While backing up, the pilot needed to be careful not to use the wheel brake toe pedals since the plane could easily tip over.

Early on, engineers decided that a digital central computer and a head-up display replace the workload and performance of a second crew member.

The Central Kallkylator 37 was the first airborne machine in the world to use integrated circuits, supporting the pilot by doing functions like navigation, flight control, and weapon aiming calculations.

The last active model of the Saab 7 Viggen retired in November 2005. Ten years later at a ceremony in Stockholm on November 2017, the US Air Force presented all Swedish pilots with Air Medals for their bravery during the Cold War.