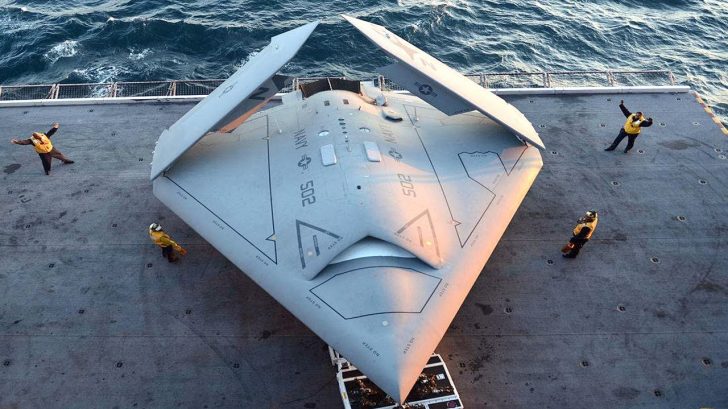 Developed by Northrop Grumman as part of the US Navy’s Unmanned Air Combat System (UCAS,) the X-4B is tailless, strike fighter-sized unmanned aircraft.

Initially, two demonstrator tests were planned initially to go through a three-year test program. However, their performance was so consistent that preliminary tests ended only after 16 flights.

The plane marked a milestone in drone development as it was the first time a UAV catapulted off an aircraft carrier.

The X-47B also accomplished the first arrested landing of a UAV on a carrier at sea, further propelling the program to create the first carrier operational drone.

Just like any popular drone, the design of the device features a defined triangular shape. The aircraft was a true flying wing, given that it didn’t show to have any obvious vertical surfaces just like the Northrop Grumman B-2 Spirit stealth bomber.

The plane can reach a cruising speed of 685 miles per hour or a high subsonic of about 0.45 Mach. It also managed to reach a ceiling of approximately 40,000 feet.

Despite its success, the aircraft eventually raised concerns about costs. It also proved to be insufficiently stealthy for the needs of the project.

The X-47 B’s legacy was eventually passed down to the X-47 C which may restore the honor of its predecessor, should it meet the requirements the Navy expects from it.