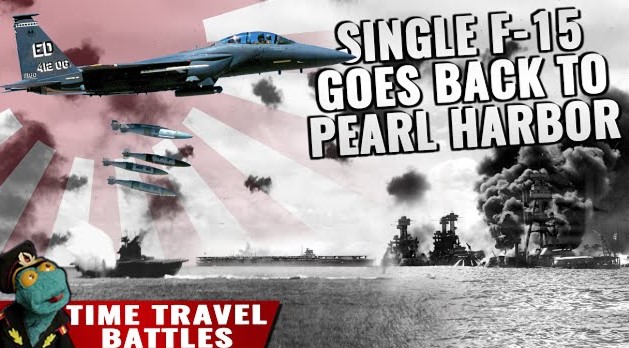 December 7, 1941, is a day that will forever live in US infamy. It was the day the Japanese attacked Pearl Harbor, taking 2,400 American lives and kickstarting the full-scale US involvement in WWII. But what would have happened if an F-15 had been sent through time just before the Japanese attacked?

In this scenario, the F-15 would be equipped with a modern weapons loadout and a filled fuel tank. For context, the F-15C carries up to eight missiles, while the newest F-15EX carries sixteen.

Assuming that the F-15 was already airborne before the attack, its multi-targeting capability could fire all its missiles in minutes. This means it could take down eight to fifteen Japanese planes depending on the F-15 variant.

Mitsubishi Zeros have no sensors capable of detecting if they’re being tracked by radar – or if a missile is incoming.

If the missiles are all spent, the F-15 can look towards its M61 Vulcan for firepower. To maintain precision, the Eagle would have to fly at subsonic speed and attack from above and behind – doing a gun run and accelerating away.

In the grand scheme of things, taking down ~20 enemy planes wouldn’t change the outcome of Pearl Harbor. The first wave is still intact, meaning it could still target vital US ships with no problem.

But what if the F-15 was configured for a bombing run? The Eagle, flying at cruise speed and laden with bombs, would take half an hour to reach the Japanese fleet. Japanese ships near Pearl Harbor had no radars back then, so the F-15 could enter the vicinity undetected at a high altitude.

GBU-53/B StormBreakers can guide themselves to a target and are small enough to be carried in large numbers. The F-15E can hold 16 of these without sacrificing any fuel. That number can theoretically go up to 28 if the aircraft only relied on its conformal and internal tanks.

Most Japanese carriers had lightly armored decks, so some bombs would have detonated inside the hangar. However, the overall impact of these bombs wouldn’t be enough to sink a carrier completely. Regardless, we can assume that most carriers would have unusable decks after about three to four hits each.

F-15s can utilize eight GBU-12 bombs or four GBU-24s weighing 2,300 lbs. If needed, it could carry three more GBU-24 bombs without external fuel tanks. Such heavy bombs can penetrate about five feet of reinforced concrete, with a terminal velocity double that of 500-lb bombs.

With at least six bombs at its disposal, the F-15 could likely hit five or all six carriers. The damage might just be catastrophic as most carriers would take on water and eventually sink. This would theoretically lead to the US forces reacting in time, therefore mitigating the effects of Pearl Harbor, crippling the Japanese Navy, and cutting the war in the Pacific short.