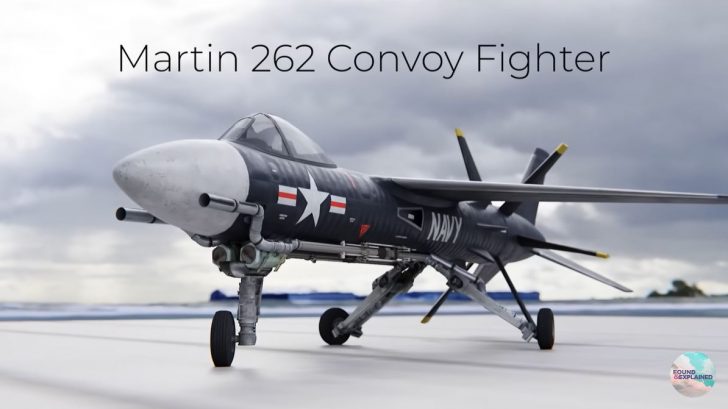 The Martin 262 Convoy Fighter was to be the cornerstone of the US Navy- this defensive fighter has propellers moving at supersonic speeds and can take off and land vertically.

It was supposed to begin an era of the helicopter-like plane, but this never happened.

The Search for a New Convoy Fighter

World War II showed a flaw for the US Navy- their convoy ships were extremely vulnerable to air attacks from the enemy, requiring excessive protection from warships.

The answer would be developing a new type of plane that would have the power of a normal fighter interceptor but didn’t need a carrier to launch or land and a plane that could take off vertically.

The competition was pretty fierce, but it was the Glenn Martin company that rose to the challenge.

The company developed the Martin model 262, a series of three different fighters called A, B, and C, only differing in the placement of the propeller.

During testing, Martin assumed the worst conditions during the landing of the aircraft. Pilots couldn’t easily land the aircraft back on the deck.

Martin designed the aircraft not to land on the ship’s deck but right on the side of the middle using a special platform to catch the plane as it hovered vertically, allowing pilots to simply match the speed of the vessel.

Martin’s obsession with options eventually became its own undoing. Not only that they showed three different models to the Navy, but they also couldn’t decide on a budget and their lack of confidence turned the Navy off.

However, its biggest blow was its weight- the aircraft was estimated to weigh 16,000 pounds versus the Navy’s own estimate of 17,500 pounds. At the end of the day, the Navy went for the lighter Lockheed and Convair.