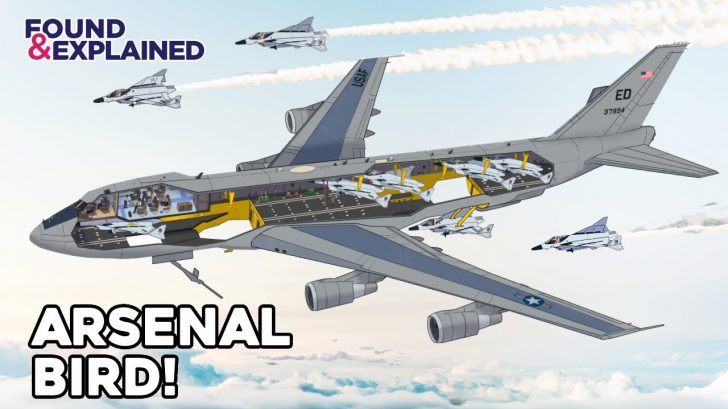 Airborne aircraft carriers would allow fighter jet sorties to get into the action in one-third of the time of a battle group, carrying more firepower than a ground-based fighter squadron.

It can also be used for everything from bomber defense, deep strike attacks, or interception against Soviet bombers.

The Race to Building an Airborne Aircraft Carrier

At first, the Boeing 707 was chosen for its existing use as a refueling aircraft. But then, the Lockheed C5 Galaxy also came up. The race was on to building a airborne aircraft carrier.

Initially, the C5 Galaxy easily fitted the bill and was easier to modify than the Boeing 747. However, further investigations found that it would have difficulty carrying cargo on board, negating its mission flexibility.

The C5 was also found to have critical balance conditions, and would not have enough fuel to refuel the parasite fighters multiple times.

Meanwhile, the Boeing 747 concept simply needed to carry more weight and add a new door. This led to the selection of the 747 as a baseline for further studies.

How Flying Carriers Would be Used

The Boeing 747 aircraft carrier had a very unique mission and the 1973 report outlined three possible situations where it could be used- ally defense, continuous air defense, and first strikes.

What Happened to Aircraft Carriers?

Airborne carriers, despite all its promise, were never built. Why though? For one, a single missile could hit it, taking it out, especially since missile technology got a lot better.

Also, had the concept been chosen, it would have painted a target on the back of every civilian 747 out there.

A tragic incident actually happened before with the Korean Airline Flight 007 when it was shot down after leaving Alaska during the Cold War in 1983. All 269 passengers and crew were killed.

This was a cold-blooded example of how the Russians thought a simple flight of the 747 would mean an attack on their sovereignty.