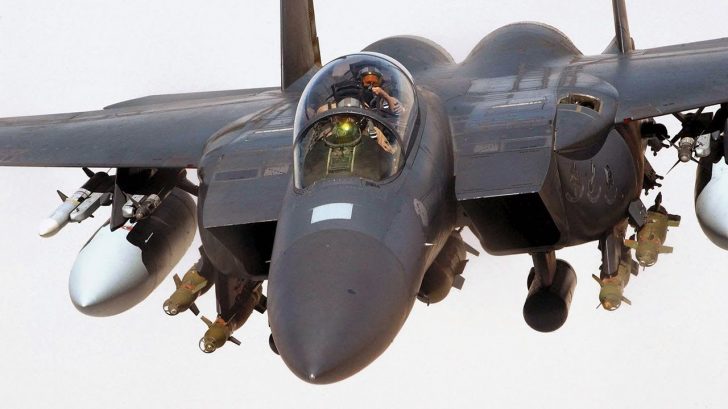 The F15E Strike Eagle can reach up to 2.5 Mach speeds and equip with laser-guided missiles. It’s also equipped with the APG70 radar detecting hostile forces even from a long-range and two LANTIRN pods that can strike at pinpoint accuracy.

Ultimately, though, this is a plane that would eventually wipe out the Iraqi Air Force on the ground.

The F15E has done over 200 flights during testing and proved to be extremely reliable, carrying 16 different weapon configurations.

After a series of meticulous trials, the US Air Force eventually went for the F15E in February 1984. However, it was only until April of 1988 that the first fully completed F15E was delivered.

The design and features of the aircraft significantly differ from their predecessors. The focus of the F15E is performing air-to-ground missions, however, it can also engage in air-to-air battles.

While it maintained the airframe of the Eagle, it had some structural changes. For instance, the aft fuselage was redesigned to make a more powerful engine. Another innovation is the APG70 radar, allowing the crew to identify long-range ground targets.

The Strike Eagle was named as such to differentiate it from its predecessor. It has a top speed of approximately 1,875 miles per hour, a wingspan of 42.8 feet, a length of 63.8 feet, and a maximum takeoff weight of 81,000 pounds.

The Strike Eagle is equipped with the LANTIRN, or low-altitude navigation and targeting infrared night system.

It’s made up of two pods attached to the plane’s exterior, giving excellent accuracy in weapon delivery.

The Strike Eagle was deployed in the Invasion of Kuwait, and as part of Operation Desert Shield, the 335th and 336th tactical fighter squadrons were deployed near the Iraq border attacking enemy positions.

As the days passed, the Strike Eagled managed to destroy over 18 Iraqi fighters near Talil Air Base. When a no-fly zone was established over Iraq, several Strike Eagles also participated in Southern Watch and Northern Watch. Today, the US has over 220 units in service.