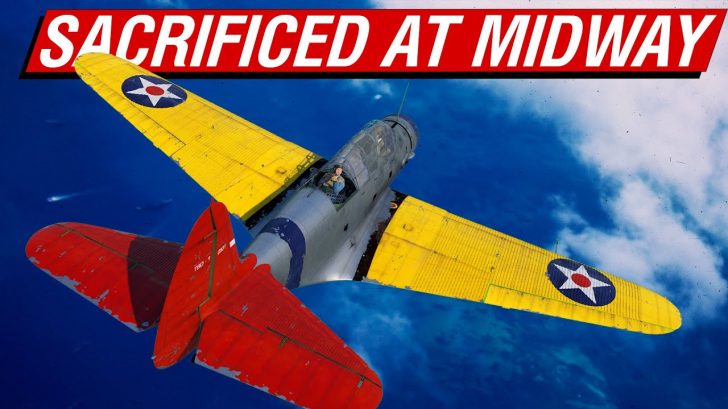 The Douglas TBD-1 Devastator is a torpedo bomber from the late 1930s. Despite the name, it didn’t do a lot of devastation at all. In fact, it’s often remembered for its own devastation during the most famous battles in the Pacific.

Here are the ten interesting facts about this obsolete bomber that was sent to fight the Japanese fleet:

1. When its first prototype emerged from the Douglas plant in 1934, the aircraft may have been the most advanced naval aircraft in the world

When this new all-metal, low-wing monoplane was introduced, this was still during a time wherein almost all aircraft were still biplanes. However, it didn’t hold the claim for too long as other more advanced aircraft were already in development.

2. The TBD-1 was a leap forward on previous naval aircraft in terms of size

It was rather huge- it featured a wingspan of 50 feet, a length of 35 feet, and a height of just over fifteen feet.

3. Its wings, which are extremely recognizable with their inter-war corrugated paneling, is massive for a single-engine carrier aircraft

4. When it comes to the payload, the aircraft can carry a wide variety of weapons than originally planned

This allowed for excellent mission flexibility. The standard gun armament is made up of two 30 caliber M2 Brownings- one in a fixed forward position from the starboard side of the cowling, the other on a flexible mount in the rear cockpit for the gunner.

5. For bombing missions, the TBD1 could be fitted to up to twelve 100 lb bombs on underwing racks

Meanwhile, on two fuselage racks, it could carry a pair of 500 to 1000-lb bombs instead.

6. Unlike other US aircraft that would see service during World War II, the TBD-1 was only built in one major variant

The TBD-1A was a singular exception worth noting, which is a sea-based patrol version of the aircraft. It was basically a TBD-1 only with the landing gear replaced by a steerable float.

7. TBD squadrons were involved in a fair number of accidents and near misses

8. TBDs weren’t technically bad, in fact, they had great low-speed performance because of their massive wings

However, when the aircraft did stall, it did so severely. If this happens at a low speed, its engine lacked the power for a quick recovery.

9. There are three main things that would limit the aircraft’s effectiveness and time in military service

This was its unrelenting march of progress, an underwhelming weapon system, and unsuitable combat tactics.

10. The Bomber eventually suffered a tragic fate at the Battle of Midway

Before air groups had gotten anywhere near a Japanese fleet, a scout plane had detected incoming TBDs of the VT-8. Combined with a dropping cloud layer hampering the escorts, it meant that the VT-8 followed by the VT-6, went on a daylight attack with an alerted, powerful carrier force with zero backups to protect them leading to tragic results.

Only about eight miles out, they’re jumped by 27 Zeros flying combat patrol. One by one, the 15 TBDs went down under relentless fighter attacks.

In the end, only one TBD flown by Ensign George Henry Gay Jr was able to make a torpedo drop but missed. He was the sole survivor of his squadron’s attack. The VT-6 is a little better, with six torpedoes, splashed into the water, and only four TBDs making it back.