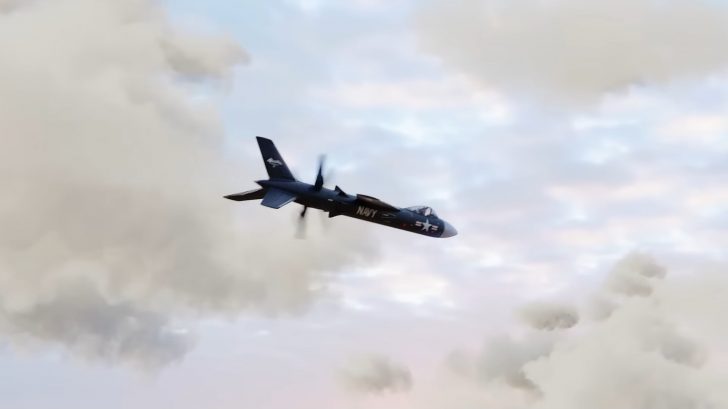 The US Navy’s convoy ships were extremely vulnerable during WWII. Their ships were particularly having a hard time against air attacks, so a bunch of companies proposed their design for a defensive fighter/interceptor. Glenn Martin entered the competition with their optimistic design – the Martin 262.

During its development phase, Martin created three designs for the aircraft, labeled ‘A’, ‘B’, and ‘C’. The designs mainly differed in the placement of its propeller. Its C variant, for example, had its propellers placed just before the tail. This allowed for a better center of gravity, a smaller tail, and better visibility for the pilot.

All three concepts were designed not to land on the deck, but on the side. Furthermore, the aircraft would have to be caught by a special platform while it hovered vertically. This meant that the pilot could simply match the speed of the vessel, with little regard to the pitch and yaw of the deck.

It Was Too Heavy

The concept aimed to reach sonic speeds at 45,000ft in under five minutes. Moreover, its operational range was estimated to be 100 nautical miles with 100 minutes of combat operation. The aircraft would have also weighed between 16,000 to 17,500 lbs, which became its main issue later on.

Martin 262s would have had two 20mm cannons on its wings, with ammo loaded through doors at the top of the aircraft. They also planned on fitting the 262 with rockets or rudimentary missiles under the wings for interception missions.

The fighter’s small tail was by design. Its small stature ensured that gusts of wind wouldn’t be able to push the 262 off course when landing on a ship. To make landings even easier, the pilots could rotate their seat in a 45-degree angle to get a clear vantage point from a window in its fuselage.