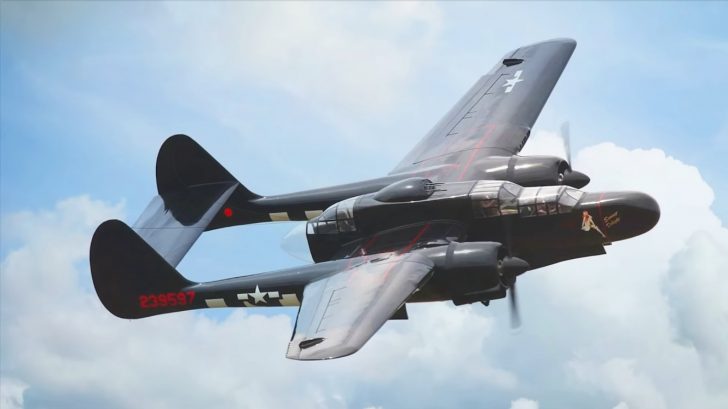 Northrop’s P-61 Black Widow was effectively used by USAF squadrons in Europe and the Pacific Theaters during WWII. This all-metal fighter wasn’t produced in large numbers compared to its contemporaries, yet left a big impact on the war. Here’s ten interesting facts about America’s storied night fighter:

Aside from being America’s first operational night fighter, the P-61 was also the first ever warbird in the world to have that distinction. To do its role effectively, the aircraft needed to be designed with a radar – also a first during that time.

2. Utilized a new form of radar

Sixteen months before America entered WWII, a US Air Officer stationed in London was informed of a new Airborne Intercept radar. AI, as it was called, was a self-contained unit operated independently of ground stations. It had the ability to distinguish hostile aircraft during periods of darkness or under poor visibility conditions.

3. Too huge to be accepted at first

Northrop’s first draft envisioned it with a long fuselage gondola, complete with two engine nacelles and tail booms. Furthermore, the fighter was 45.5 ft in length, had a 66 ft wingspan, and a projected 22,600 lb full-load weight. This was unheard of at the time, making the P-61 a hard sell as a fighter.

4. Fitted with a quartet of cannons

As its design evolved, Northrop decided to make do without its ventral turret. Instead, the company focused on mounting four 20 mm Hispano M2s on its belly. Because of this change, the P-61 became one of the few US fighters to be fitted with a quartet of 20 mm cannons.

5. Had a radar trainer variant

The Marines initially planned to get 75 P-61s in the middle of the war. However, these were canceled in 1944 to make way for the Grumman F7F Tigercat. Still, the Marines received 12 P-61Bs from the US Air Force to serve as radar trainers until the Tigercats became available.

6. A General held a competition between the P-61 and the Mosquito

Lt. Colonel Winston Kratz found it hard to believe that a P-61 would be as fast – or even faster – than a de Havilland Mosquito. General Spaatz then ordered a competition between the two, with Kratz betting $500 in favor of the Mosquito. The “race” proved that the P-61 was faster at all altitudes, outturned the Mosquito in every altitude, and even had a faster rate of climb.

There were three recorded instances where a P-61 was presented with a chance to down a far-advanced Luftwaffe aircraft during the war. Unfortunately, it also failed three times. The first one, an Me 163, was gliding too fast. An Me 262 also proved to be too fast to intercept. Lastly, an Me 410 at treetop level also sped away after the P-61 dove on it.

It is widely believed that a P-61 named Lady in the Dark claimed the last kill on a Nakajima Ki-44. The Black Widow was piloted by Lt. Robert Clyde and Bruce LeFord on August 14/15, 1945. The Ki-44 saw the fighter and tried a series of evasive maneuvers at wave-top level. Its pursuit ended with the Japanese plane striking the water and exploding on impact.

An ejection seat was taken from a captured He 162 and was fitted into an XP-61B. First Sergeant Lawrence Lambert volunteered to be the first live test and was successfully ejected out of the aircraft at 302 mph at 7,800 ft. Lambert was later awarded the Distinguished Flying Cross for his actions.

The P-61 was redesignated as the F-61 after the war. Its new designation meant that the warbird now served as a long-range, all-weather, day/night interceptor. It was operated by the Air Defense Command and the Fifth Air Force until 1950.