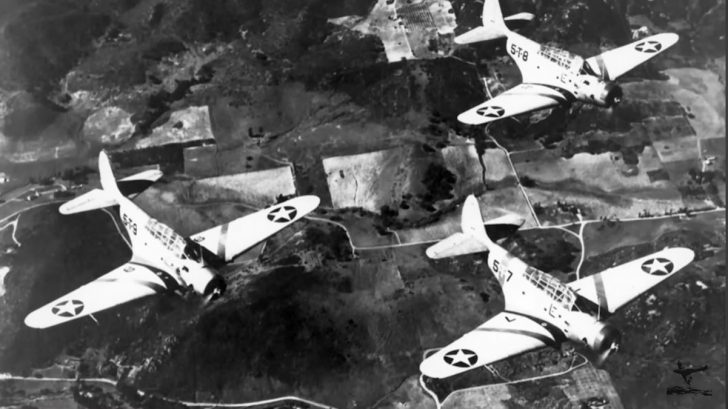 The Douglas TBD-1 Devastator was the first torpedo bomber of the US military.

Although it was initially known to be a cutting-edge aircraft, it became obsolete after just a couple of years. Its poor performance during the Battle of Midway eventually hurt its reputation during World War II.

The TBD-1 is a big step forward in naval aircraft design. Upon entering service, it was the first all-metal-low-wing torpedo bomber.

It was also a huge leap from previous naval aircraft in terms of size, as she was rather huge. It features a wingspan of 50 feet, a length of 35 feet, and a height of over 15 feet.

Its light wing also gave the aircraft excellent maneuverability. According to pilots, it could do all aerobatic maneuvers that its power would allow.

The aircraft’s service life began in the autumn of 1937, and the first squadron to get the TBD was the recently formed VT-3 torpedo.

In the first couple of months of operations, the VT-3 served as some kind of unofficial troubleshooting team, learning the painful lessons that were passed to the newer squadrons joining the fleet.

When newer squadrons joined, serious attrition losses started to mount. The causes of these losses varied- ranging from mid-air collisions to accidents that occurred during take-off and landing.

Why Was the It Unprepared for War?

There were three primary things that limited the TBD-1’s effectiveness and time in wartime service- unrelenting progress, a disappointing weapon system, and unsuitable combat strategies.

The combat tactics done in peacetime exercises were often considered by most flying officers to be unsuitable.

During the first months of the war in the Pacific, the aircraft saw very little action. During the attack on Pearl Harbor, none of the Pacific fleet carriers were there.

While the Enterprise launched TBDs later on in retaliation, they were sent after a misidentified target. It was only until February 1942 that the Devastator would see its first true offensive actions, striking Japanese bases in the Marshall and Gilbert islands.

The Battle of Midway

The Battle of Midway happened just when the frontline career of TBDs was coming to a close. Out of the 30 VT-8 Crew that participated in the battle, only George H. Gay was the sole survivor. The VT-6 fared a lot better, but with only four TBDs making it safely back home.

After the Battle of Midway, lessons were painfully felt and losses need to be learned. It eventually marked the TBD’s role as a front-line aircraft. Despite its notorious reputation in Midway, the TBD would linger in service, but not as a frontline bomber. They were used as trainers in Corpus Christi in Texas until 1942.

NAS Miami operated a number until 1943, while NAS Glenview until 1944, and the last TBD in the inventory was finally scrapped in November of that year.