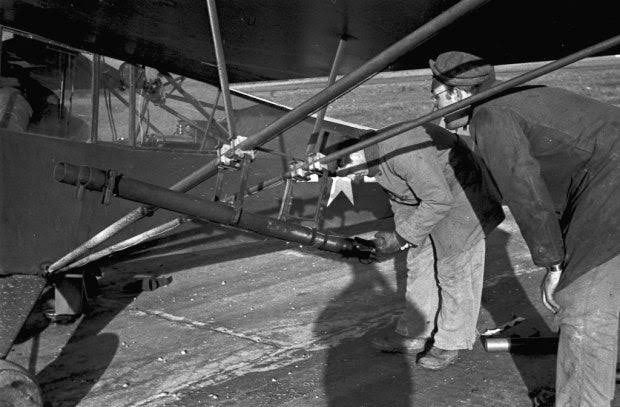 German Panzer and Tiger tanks were amongst the best the world has ever seen during WWII. These tanks had heavy protection from the front and sides, making it harder for American tanks to score a fatal hit. However, these German tanks had one big weakness – they were incredibly vulnerable from the top.

Charles Carpenter was a History teacher before he became a military pilot during the war. While in the military, Carpenter was assigned to be a spotter for Army artillery while flying the L-4 Grasshopper. As you might have expected, this role was not something Carpenter enjoyed. This bold pilot would rather be inside a Mustang, not a Grasshopper.

L-4 Grasshoppers were incredibly light and designed to maximize speed. To do that efficiently, the aircraft would have to carry no armament. This made the aircraft agile, and able to loiter over an area for a long time. Moreover, this small plane could take a major beating unless a round managed to hit the pilot, the fuel tank, or the engine directly.

It didn’t take long for Carpenter to find a way to enjoy his role. He heard rumors about the liaison pilots who attached an M1A1 Bazooka on their planes. These rocket-propelled explosive penetrators had an effective range of 250 to 300 yards.

After hearing this, Carpenter immediately attached two Bazookas onto his Grasshopper’s wings and rigged an electric switch that could be toggled from the cockpit. He later named his Grasshopper, “Rosie The Rocketeer”, a play on Rosie The Riveter.

Carpenter scored his first kill with his new setup against a German armored vehicle. The Grasshopper dove down from above and got a direct hit with a single Bazooka shot.

He also got his first Panzer kill shortly after that. Carpenter did so by flying a hundred meters above it, then letting go of the explosives. The dangerous maneuver was essential as he had no way of accurately aiming the M1A1.

From Two To Six

Carpenter’s original two-Bazooka setup eventually grew to six, while more and more pilots heard of his successes and tried the tactic out for themselves.

They weren’t as fearless as Carpenter, though. Now that the Germans knew about his exploits, German infantry threw everything they had to knock Grasshoppers out of the skies. This, of course, became rather too dangerous for others as the Grasshopper provided almost no protection to the pilots.

Rosie To The Rescue

Now, with six Bazookas fitted on his trusty Grasshopper, Carpenter took to the skies and positioned himself above a battlefield. The thick ground fog became a hindrance to him at first. When the fog cleared up, Carpenter spotted a column of APCs and tanks on their way to support the German army.

As usual, he quickly put his plane into a dive and lined up two personnel carriers for attack. The carriers were taken out by the Bazookas, leading the Germans to break formation to evade further aerial attacks. His brave actions bought time for American forces to regroup and retreat safely on time.