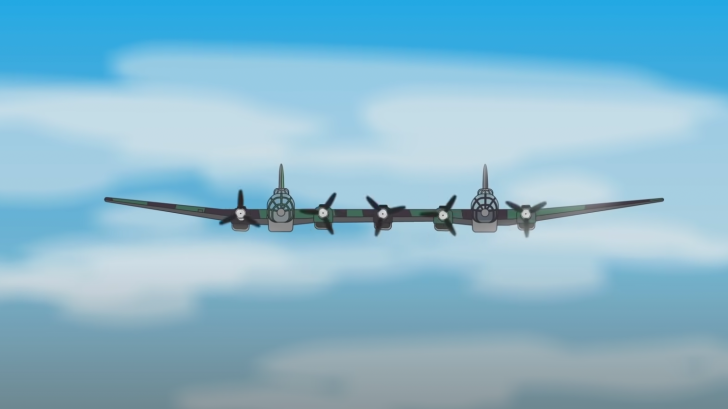 In early 1944, a Spitfire pilot on patrol over Northern France reported seeing what appeared to be two German Heinkel 111 bombers that were joined together as one aircraft.

Initially, British intelligence dismissed this, until an RAF Mosquito shot one down, finally confirming that such a weird aircraft did actually exist.

The Heinkel 111z was developed back in 1941 as a plane that would have enough power to tow the Me 321 heavy cargo glider off the ground and into the air.

The intention was for this glider to be used in Operation Sea Lion, the Invasion of Britain. However, after the Battle of Britain when the RAF managed to retain air dominance, the plan was abandoned.

The Me 321 was truly a gigantic aircraft. It boasts a wingspan of 180 feet, carrying up to 130 soldiers or around 23 tons of supplies and equipment.

Crucially, it was able to carry armored fighting vehicles. However, soon the issue was apparent that the issue with the Me 321 getting off the ground.

When using three powerful Me110c twin-engine fighter bombers to tow the Me321 in the air, it became too complicated, even dangerous.

Therefore, the aircraft manufacturer, Heinkel came up with a radical but practical solution by joining two of their He 111 twin-engine medium bombers together, connected by an extra engine, giving the plane additional power.

The plane had a crew of seven. Surprisingly, it was well-liked by crews and had an impressive long range in excess of 1200 miles (around 1900 km.)

This can be further extended with fuel drop tanks, letting it stay in the air for up to 10 hours.

One significant drawback of the He 111Z was its poor towing speed, barely more than 130 miles per hour. This makes it incredibly vulnerable to attacks from Allied fighters.

Thus, throughout its service career, the plane was kept as far away from the front line as possible.