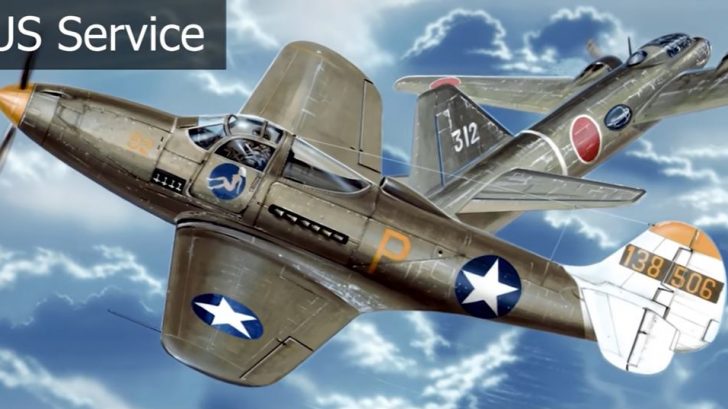 The P-39 was a US single-engine fighter that became one of the most controversial fighters of its time. It’s either you love it, or you hate it.

Development of the aircraft started back in 1937 as an answer to the Air Corp’s call for a single-engine, high-altitude interceptor.

The first prototype flew a year later, but it fell short. It only had a speed of 400 miles per hour at below 20,000 feet. Thus, the Airacobra’s turbocharger had to be removed, which was a crucial mistake, causing the performance to drop dramatically above 12,000 feet.

Great Britain took an interest in the aircraft, but it only managed to fly two combat missions because of several drawbacks. The most significant was its poor performance above 20,000 feet and a weak rate of climb.

After the attack on Pearl Harbor, over 600 P-39s were built. It saw action in the Southeast Pacific and New Guinea. US pilots found out that the P-39 was as fast as the Zero, a better diver but indeed a worse climber. In fact, only one US pilot- Lt. Bill Fiedler, became an ace flying it.

The Soviet Theater was where the P-39 truly shined. The Soviets were initially skeptical about the aircraft. But the P-39s were excellent in low-altitude aerial combat, making them a good weapon in the Soviet’s arsenal.

In fact, political leader Joseph Stalin even requested President Roosevelt for more up-to-date fighter Airacobras. The number boomed from merely 193 delivery planes in 1942 to 2,629 the following year. Soviet pilots could score more individual victories than any US fighter in the Soviet Service.

The P-39 garnered a bad reputation among US pilots in WWII.

The aircraft didn’t stand a chance in European high-altitude fighting, and there was no way it was able to compete with Western fighters. It eventually found its home in the skies of the Soviet Union as the Russians loved it.